In 2019, the Government of Brussels decided to create new administrations within the Brussels Regional Public Service (BRPS). Among these, Brussels International was tasked with developing a consistent European and foreign affairs policy for the Brussels-Capital Region (BCR). The administration, which was created on 1 November 2019, is now up and running.

As the capital of Europe, Brussels has always had an international vocation. Since Brussels serves as the seat of several European and international institutions, the Region must become a reference and a voice that is heard.

The creation of the new Brussels International administration attests to the Government’s desire to place European affairs and relations on the same footing as other regional policies. Our ambition is to turn this Directorate-General into a regional expertise and coordination centre for structural funds, European and international relations, and development cooperation. This will allow the Region to strengthen its position as a major player on the international stage.

The challenges are obviously commensurate to our ambition. On the one hand, we want to fulfil our international obligations, making the best use of and exploiting international opportunities as leverage and support for other regional policies. On the other hand, our aim is to support and affirm the international character of Brussels within the Region, in respect to other Belgian entities, and on the global stage.

Brussels International, which is managed by its Director-General Anne Claes, is the result of the merger of several, previously separate, entities: the External Relations Department and the ERDF Department (European Regional Development Fund) – Beliris, the Licensing Unit, and the Delegation of the Brussels-Capital Region to the European Union. 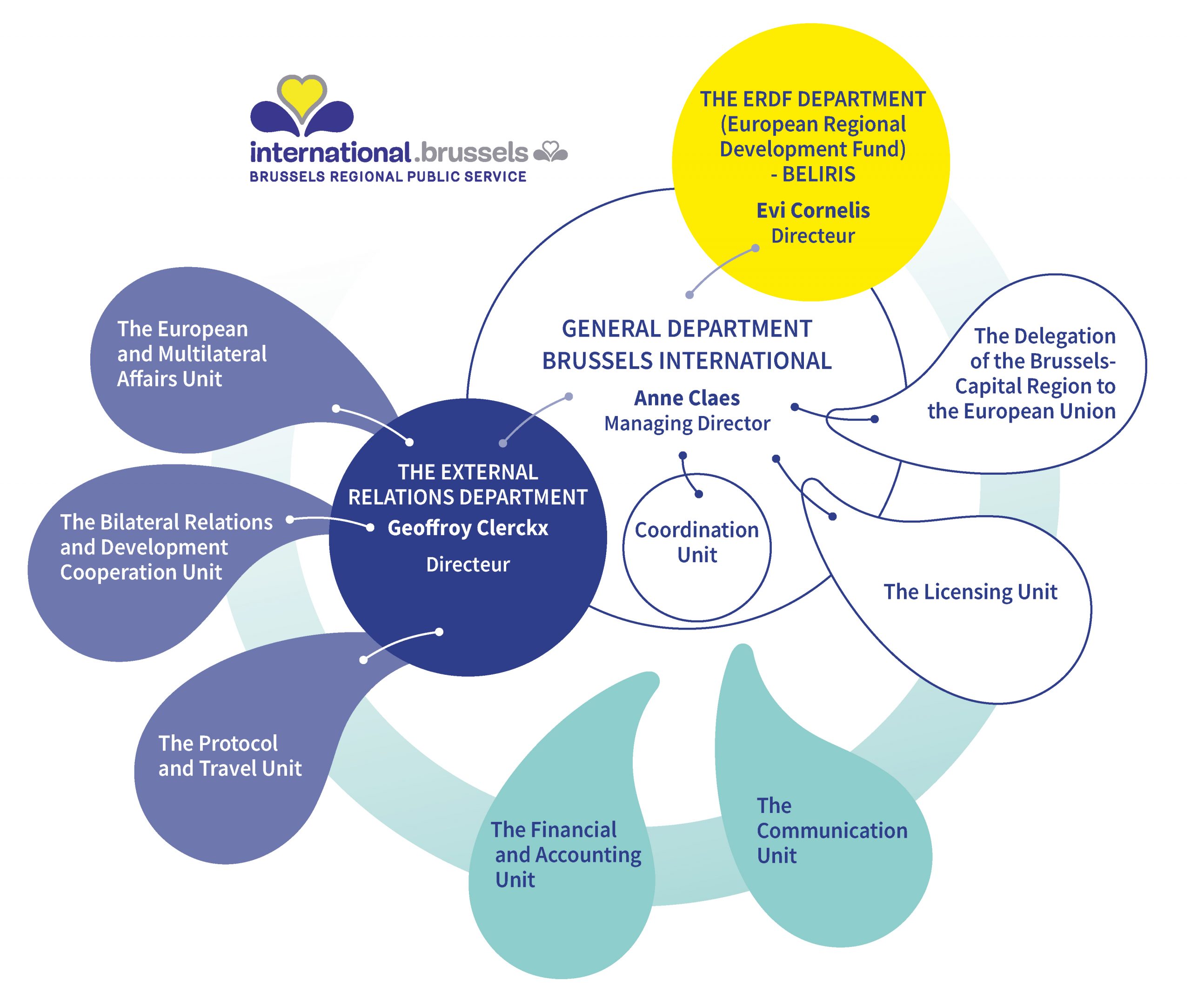 It manages the BCR’s bilateral relations with cities, provinces, and regions around the world, which are primarily founded on cooperation agreements.

It is also in charge of the BCR’s development cooperation policy as well as its multilateral relations.

The External Relations Directorate also works closely with the BCR’s Delegation at the Permanent Representation of Belgium to the European Union in terms of monitoring and participation in European policies.

This Department oversees the implementation and follow-up of the ERDF operational programme in the BCR. This means it supports very specific projects aimed at strengthening the Region’s economic, social and territorial cohesion, with the help of European and Brussels funding. The ERDF Department liaises with the European Institutions and regional and local stakeholders, relying on the expertise of other regional administration services, regional partners, the beneficiaries of funds and third parties from other Belgian and European regions.

Beliris, on the other hand, is the result of a collaboration between the federal government and the BCR. Its objective is to promote the influence of Brussels as the capital of Belgium and Europe.

The Beliris unit is tasked with advising the Regional government and ensuring compliance with initiatives agreed between the latter and the federal government. These initiatives consist of investment choices and financing (building, renovation and restoration projects) in the BCR at various levels (mobility, social housing, green spaces, neighbourhood revitalisation, culture, heritage and sport).

The Licensing Unit deals with applications related to the granting of import, export and transit licences for weapons and dual-use goods and technologies. This competence was devolved to the Regions in 2003.

The BCR’s Delegation to the European Union

Brussels International will have to evolve in the coming months and years. The new Directorate-General has been tasked with creating new units and strengthening others. This includes the development of a Protocol service and the creation of a strategic unit for the coordination of the various European funds and financial instruments, including the ERDF funds, to make the most of them, to integrate them and to link them to the various regional, community and local policies that are implemented in the territory of Brussels.

To find out more