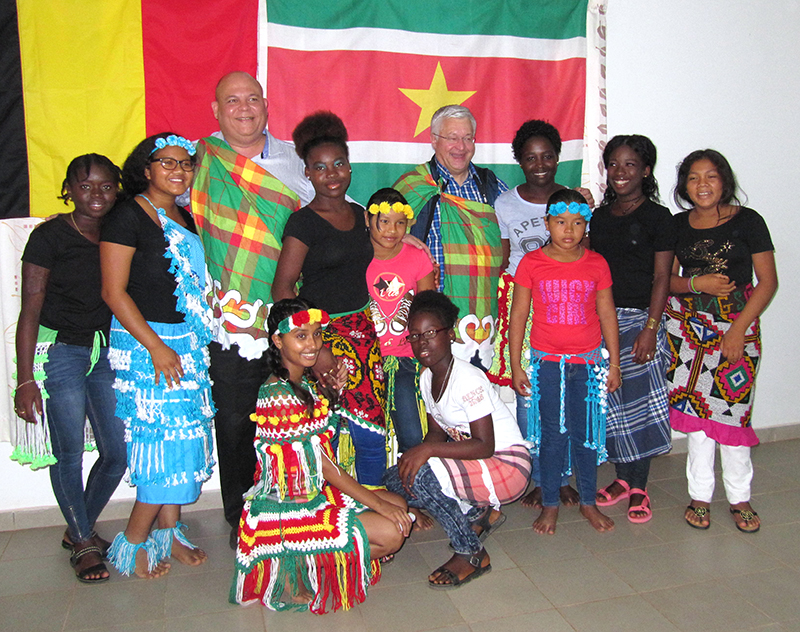 From 24 until 27 April 2017, the Brussels Minister of External Relations, who is also competent for Education and Training as a member of the Board of the Flemish Community Commission, conducted a working visit to Suriname. During this trip, he created the basis for a fruitful collaboration between schools in Brussels and Suriname. 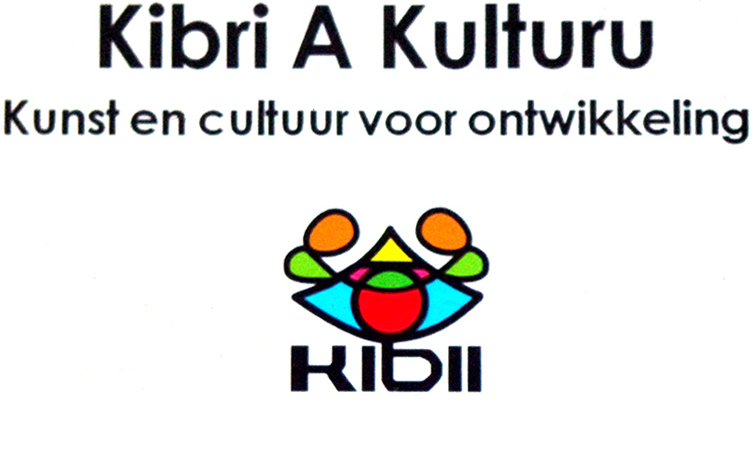 Dutch: the common denominator between the Brussels-Capital Region and Suriname. 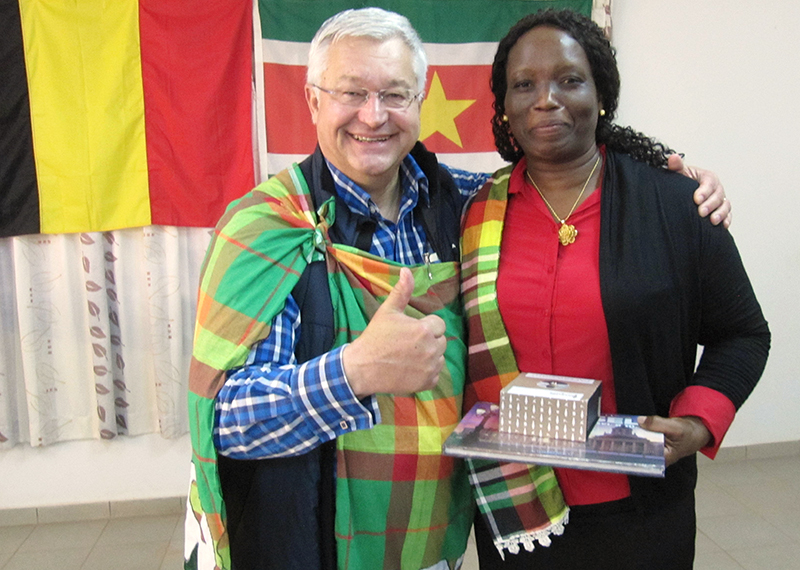 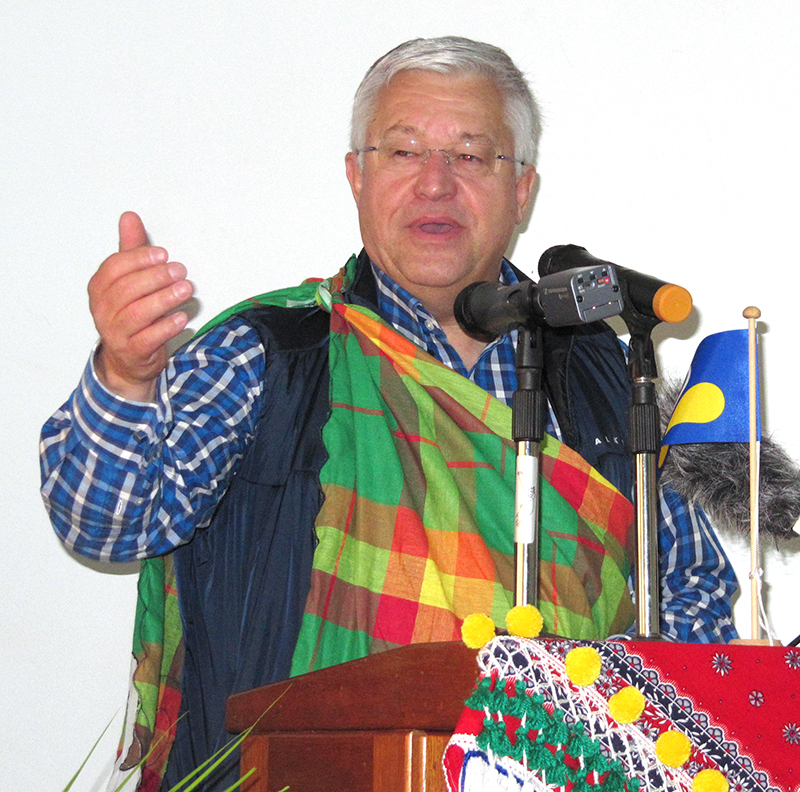 Guy Vanhengel gives a presentation about the professionalisation of education in the twenty-first century. 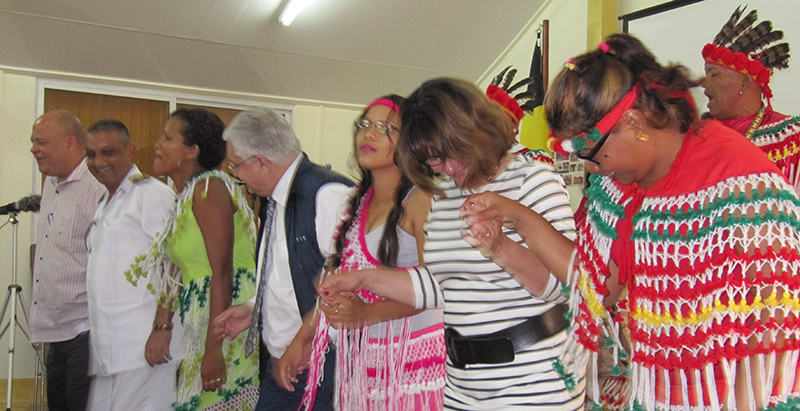 The photos of the two ministers, engaged in a traditional dance of the Amazon Indians, made it onto the front page of the no. 1 newspaper in Suriname and even on the TV news!

Signing of the partnership agreement, in the presence of local media, with the national Education Minister of Suriname, with the districts of Marowijne, Saramacca and the capital Paramaribo.

The Republic of Suriname, which is situated on the northeastern coast of Latin America, is a former Dutch colony. This explains why the country’s official language is still Dutch, which is also used in education. Moreover, its population is very diverse.  Besides the original ‘Indian’ population, other ethnic groups include descendants of African, Javanese and Indian workers as well as people who originally came from Spain, Portugal, Great Britain and France. All their children attend school in Dutch-speaking educational establishments. In a sense, the situation is more or less similar to that of Flemish schools in Brussels…

With this in mind, the Surinamese Minister of Education, Science and Culture invited Guy Vanhengel, the Brussels Minister of External Relations, for a working visit on the invitation of the Surinamese Embassy in Belgium. As a member of the Board of the Flemish Community Commission, tasked with Dutch-speaking education in Brussels, the Minister was duly accompanied by a delegation of this commission.

Robert Peneux, the Surinamese Education Minister, gave his Brussels visitors a very warm welcome. They were received in his office, where various education specialists awaited them. In the local parliament called De Nationale Assemblee (DNA), the delegation followed interesting presentations about various problems in schools across Suriname, including language gaps, the lack of parental involvement, the issue of drop-outs and so on. The first day of the visit ended with a presentation by Minister Vanhengel at the university. The academic audience especially appreciated his speech which was entitled “The Importance of the Professionalisation of Teachers in the 21st Century”.

On the second day, the delegation visited Marowijne District. This remote territory on the fringe of the Amazonian Forest is located on the border with French Guyana. It has all the characteristics of a rural area but its schools compensate for their limited resources with overwhelming enthusiasm. Numerous children who speak another language, including French, are educated here in Dutch. The Nucleus educational centre in Albina, the district’s capital, will definitely develop partnerships in the future with its Brussels counterpart, the Onderwijscentrum Brussel, on various issues.

In the afternoon, the delegation learnt more about the Moengo Network, a social-cultural network that helps local children develop their talents, allowing them to choose a career path that suits them later in life. The programme includes sports, music, dance and theatre. Also in Moengo, the delegation visited the arts centre of the artist Marcel Pinas. This internationally-renowned painter exhibits his work from New York to Shanghai. And who knows, maybe soon it will also be showcased in Brussels?

The next day, the delegation travelled to Saramacca District and its capital Groningen, where the inspector of the district’s education department invited her Brussels visitors to follow her lead in a dance based on the rhythms of the culture of the Amazonian Indians. The photo of the two dancing Ministers (Brussels and Surinamese) even made it onto the front page of Suriname’s no. 1 newspaper and on the local TV news. The day ended with a large-scale reception to which all the representatives of the education community in Suriname had been invited as well as Belgian and Surinamese members of various associations.  The evening proved fruitful, giving rise to various ideas that may culminate in partnerships in the fields of education, arts and culture.

On the last day, the delegation enjoyed an exciting visit to the University of Suriname, followed by a short meeting with the Vice-President (and the Head of Government) Michael Adhin. Minister Vanhengel signed a partnership agreement in the presence of the national press, with the national Education Minister of Suriname as well as with the districts of Marowijne, Saramacca and the capital of Paramaribo.

Clearly, the intention is to work together closely in the future on the development of common educational institutions, offering support at a later stage in other areas in this small yet dynamic country.