The Brussels delegation in front of the Manneken Pis statue in Nagoya.

The Brussels Days head to Japan

In May, the Brussels-Capital Region spent four days in Tokyo, Nagoya and Yokohama on the occasion of the Brussels Days. A large Brussels delegation, led by Minister-President Rudi Vervoort, made the trip to present the multiple facets of our dynamic region.

Manneken Pis in Nagoya in the costume of a Brussels firefighter.

A tourism seminar organised by visit.brussels. 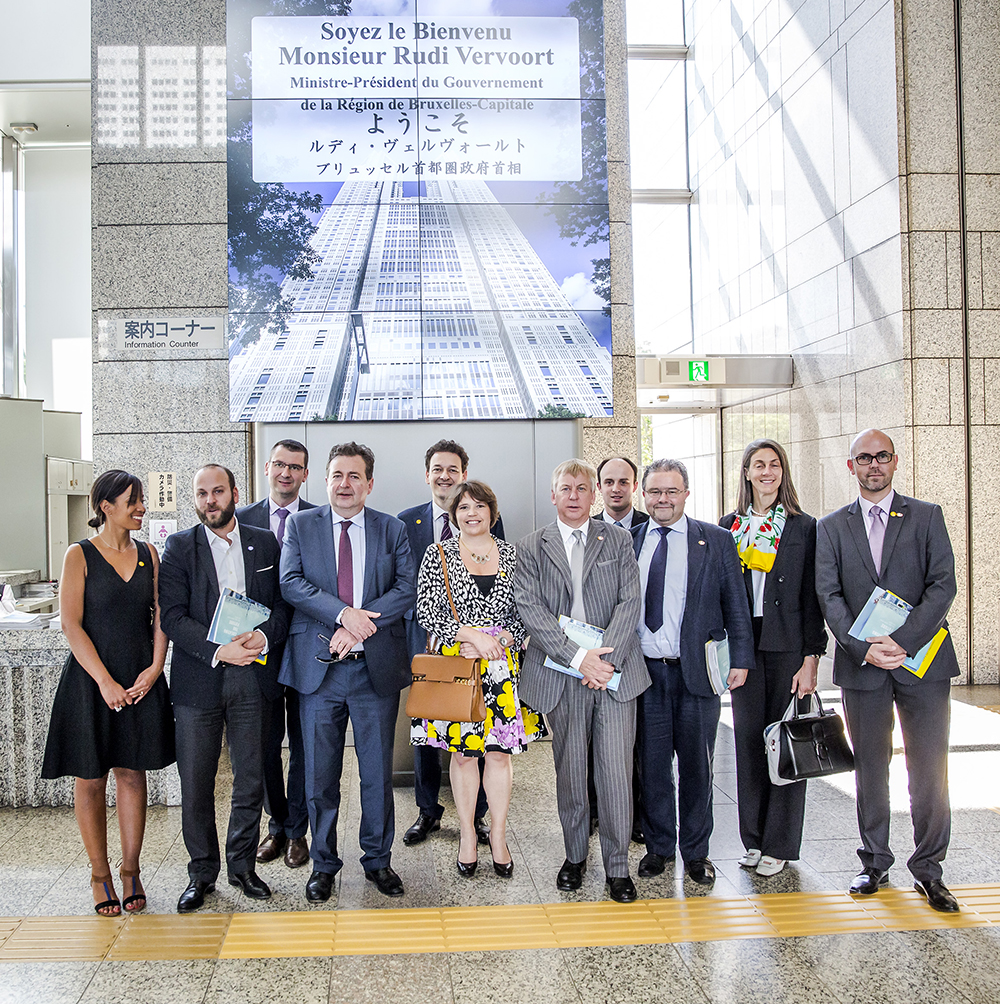 A word of welcome to the Tokyo Metropolitan Government. 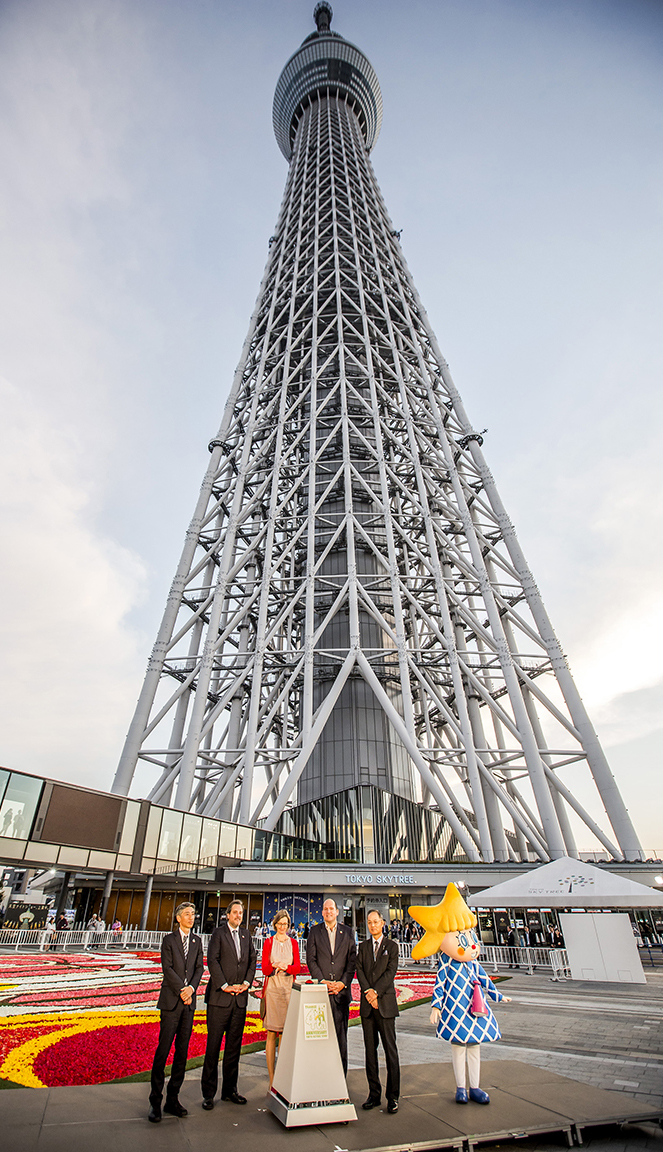 Inauguration of the flower carpet at the Skytree Tower. 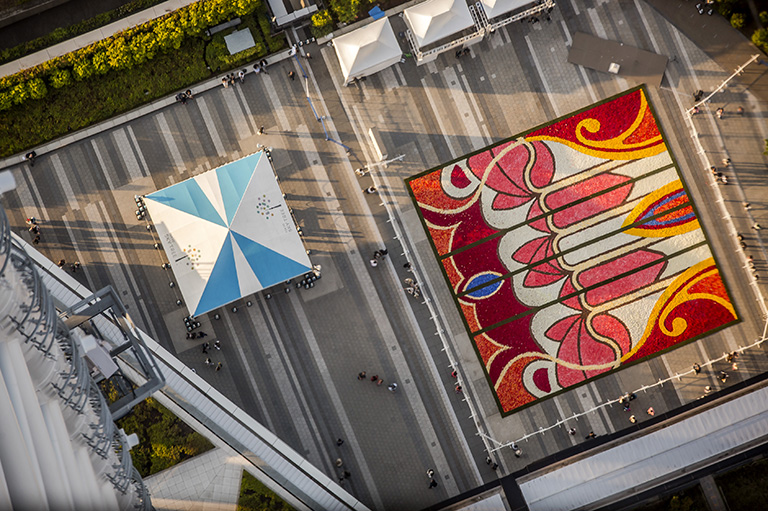 The Skytree flower carpet seen from above.

Inauguration of the flower carpet in Roppongi Hills. 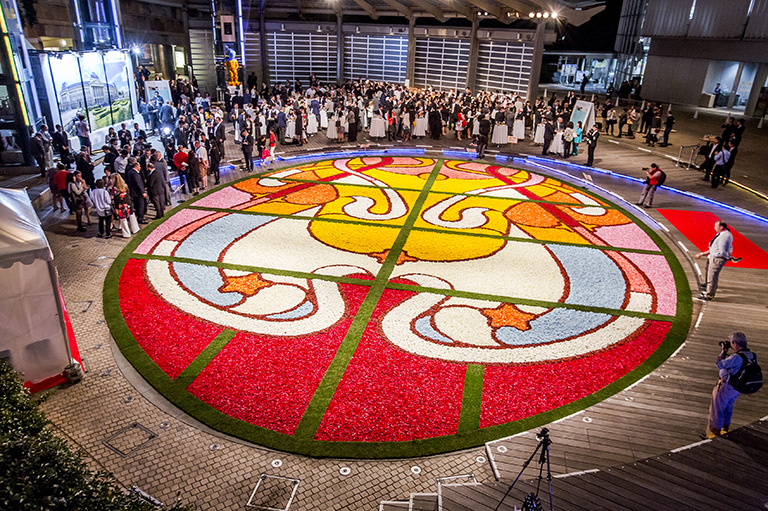 Inauguration of the Belgian Beer Weekend in Yokohama.

After Beijing and Milan in the past two years, Tokyo was chosen as the destination for the 11th Brussels Days, during which the Brussels-Capital Region aims to convince large cities of its assets. The aim is to position the region internationally, to enhance its economic dynamism, to reveal or confirm its talents and expertise and showcase its amazing culture and lifestyle.

Tokyo was a natural choice in 2016, given that Belgium and Japan celebrate the 150th anniversary of the first diplomatic relations between the two countries. Several events are being organised in both countries to mark the occasion, including in Brussels. The traditional flower carpet in the magnificent Grand-Place in Brussels will feature Japanese motifs (15 to 17 August) while the comic strips festival will welcome Japanese participants in September. It is worth noting that the Japanese national airline ANA inaugurated a direct connection between Brussels and Tokyo on 25 October 2015, thus greatly facilitating the organisation of the Brussels Days.

The Brussels delegation, led by Minister-President Rudi Vervoort, included a large number of participants, including Cécile Jodogne, State Secretary for Foreign Trade, Firefighting and Emergency Medical Assistance; Philippe Close, Alderman for Tourism of the City of Brussels and Regional Deputy as well as Christian Lamouline, the Secretary-General of the Brussels public regional service. The three organisations that traditionally organise the Brussels Days, namely Brussels International, Brussels Invest & Export and visit.brussels, also joined, as well as MAD Brussels (fashion and design) and 22 Brussels companies and tourism enterprises.

The Brussels Days were organised from 16 until 19 May. The first stop was the city of Nagoya, which is about 350 km southwest of Tokyo. Here Mrs Jodoigne addressed an audience of businessmen at a conference where she reminded them of the assets of Brussels as well as of the determination of our capital to overcome the tragic events of March.

In Nagoya, the district of Sakaemachi is twinned with the Brussels Louise neighbourhood. Since 2015, you can visit a replica of the Manneken Pis here. Mrs Jodogne presented the statue with its first costume, that of a Brussels firefighter. The State Secretary hoped that the Land of the Rising Sun would also adopt this quaint Brussels tradition. The Governor of Aichi Prefecture (population: 7.5 million) also attended the ceremony.

Tourism, investments and exports on the menu

On Tuesday 17 May and during the following days, the emphasis in particular was on tourism between Japan and Brussels, which suffered greatly as a result of the attacks of 22 March. The Minister-President met with the heads of the JATA (Japanese Tour Operators Association), the Japan Tourism Agency and the airline ANA. He also chaired a seminar on “Brussels as a leisure destination”, which targeted tour operators and travel agents, during which he presented the 2017 culture and events programme in Brussels.

State Secretary Cécile Jodogne, meanwhile, participated in a breakfast seminar with “Women in Business” and met with the heads of Mizuho Bank, which represents many Japanese SMEs.

The Minister-President and the State Secretary then went on to meet with the CEO of Sony. This multinational, which operates in the digital, media and entertainment sectors, recently acquired two Brussels companies at the forefront of innovation, namely Softkinetic (3D and motion recognition) and Memnon (the leading provider of scanning services and the preservation of digital archives).

These partnerships between Sony and Brussels companies confirm the status of Brussels as a talent pool, which only enhances its appeal to foreign investors. The investment seminar, organised by Brussels Invest & Export on Wednesday in the Belgian Embassy, attracted twenty Japanese participants, mainly from the pharmaceutical industry.

Another important part of the economic programme of the Brussels Days was the promotion of Brussels export products. This included a seminar on eco-building, which is a Brussels speciality, where the surface area of passive buildings already exceeds one million square metres.

Culture also played an important part in the programme. On 17 May, a launch party was held for the Japanese tour of a performance called Snake Dance, in Hakuju Hall in Tokyo. In it the Brussels film director Manu Riche combines imagery on the origin of the atomic bomb with a sublime recital by the great Japanese pianist Jun Kanno, whose parents survived the Hiroshima atomic bomb and the carpet bombing of Tokyo respectively.

On Thursday 19 May, MAD Brussels organised a more upbeat event at the Belgian Embassy. The “Brussels creativity” seminar, which focused on design and fashion, presented a series of works by Brussels designers in an original setting designed by Lhoas & Lhoas.

A meeting with the governor of Tokyo

On Wednesday 18 May, there was a very important diplomatic and political event on the agenda. The Brussels delegation met with the Governor of Tokyo, who oversees a megacity of 13 million inhabitants. During this meeting in the margin of the Brussels Days, the governor and the minister-president among others had the opportunity to sign a cooperation agreement as well as discussing the new security measures taken in Brussels given the attacks of March.

A more technical meeting took place after this high-level meeting, involving the administrations of both parties. Brussels was represented by Christian Lamouline, the Secretary-General of the Brussels public regional service. The presence of the head of the Brussels administration demonstrates Brussels’ willingness to sign an agreement with Tokyo soon.

Not one, not two but three Brussels flower carpets!

The highlight of the Brussels Days was the inauguration of not one, not two, but three Brussels flower carpets, including the highest flower carpet in the world (451 m) in the Skytree Tower, which towers over Tokyo and which celebrated its fourth anniversary with a second flower carpet at the foot of the tower.

The third flower carpet was located in the magnificent setting of Roppingi Hills and was inaugurated by the Governor of Tokyo, the Minister-President, the State Secretary and the Belgian Ambassador. The event was attended by a swarm of TV and newspaper journalists as well as a few hundred carefully selected guests.

On Thursday evening, the 2016 Brussels Days ended on a jolly note with the inauguration of the Belgian Beer Weekend in Yokohama, the country’s second largest city which forms a conurbation with Tokyo. Two Belgians, who moved to Japan twenty years ago, organise weekend events there, which feature over 100 Belgian beers, presented in eight Japanese cities. Every time, tens of thousands of Japanese beer fans discover our marvellous Belgian brews during these events. Philippe Close, the Alderman for Tourism of the City of Brussels, had the opportunity to present the future Beer Palace on this occasion. This will open in the former building of the Brussels Stock Exchange.

In short, a busy, great and diverse programme, combined with a warm welcome and a good attendance of our Japanese hosts. Mission accomplished!