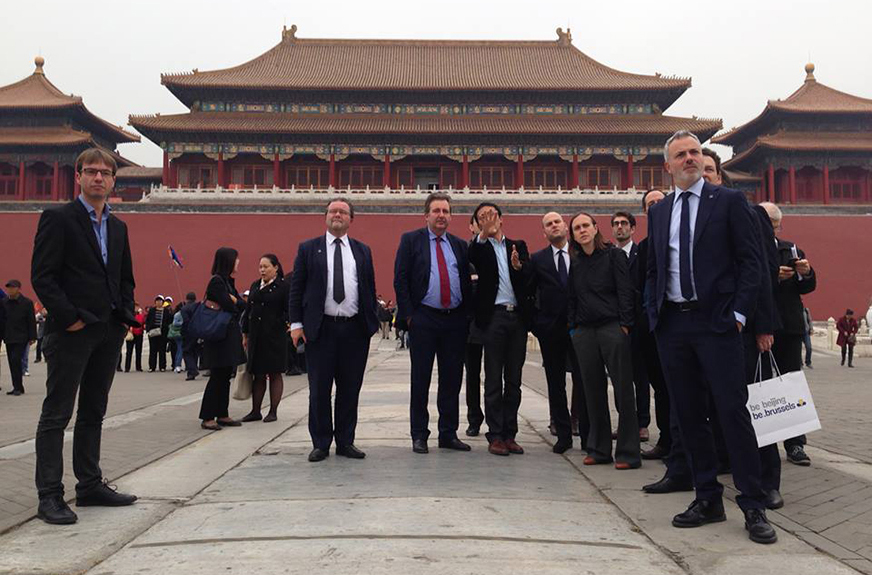 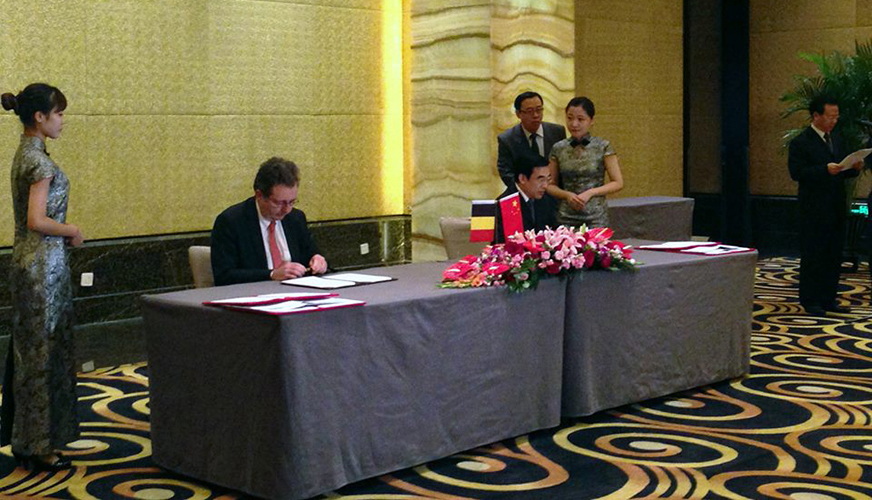 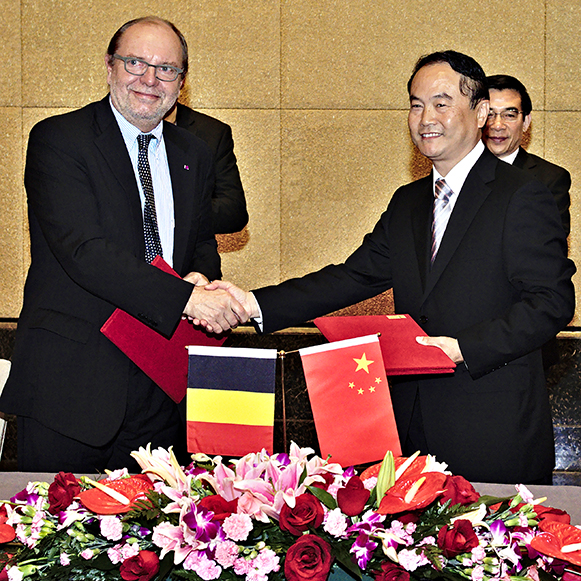 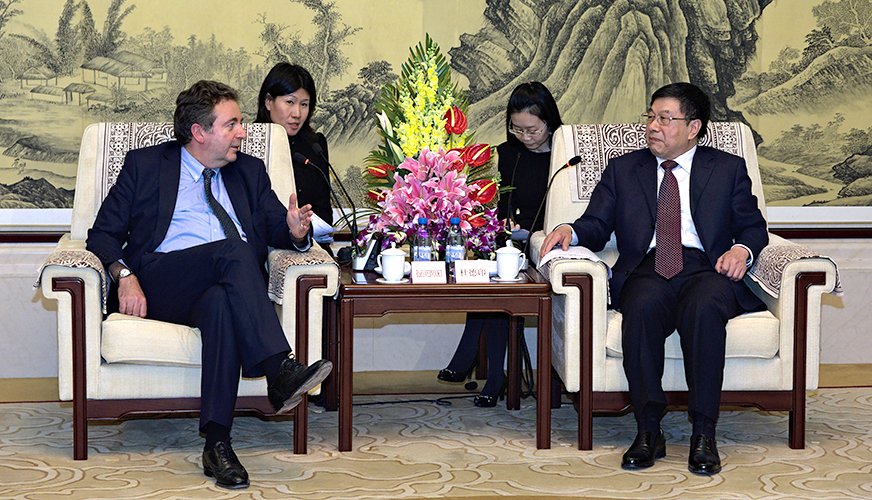 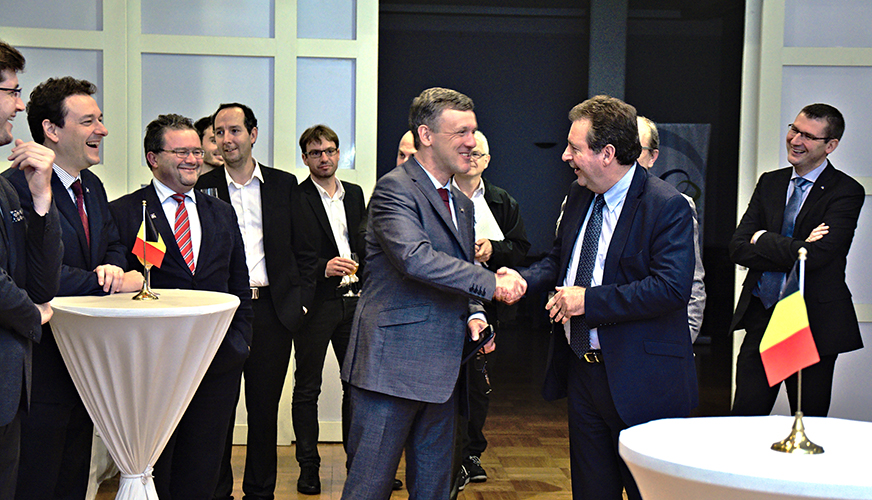 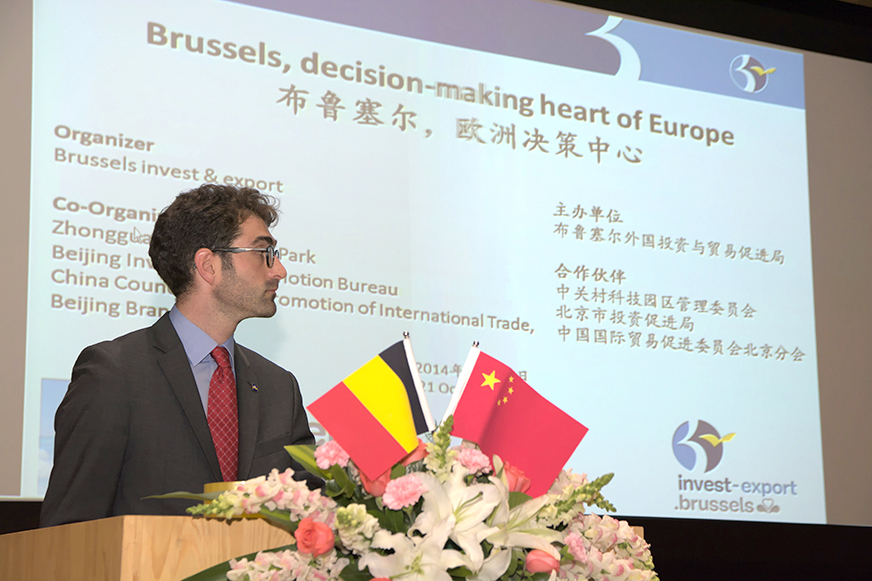 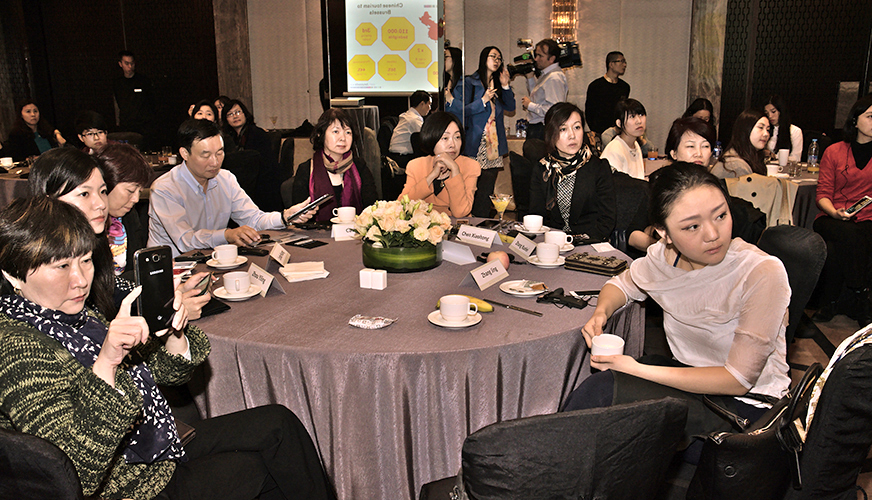 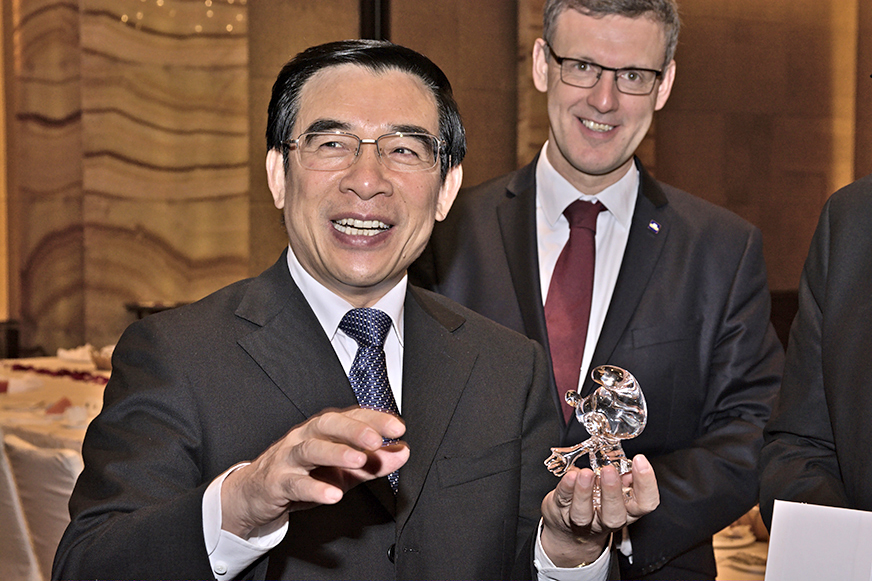 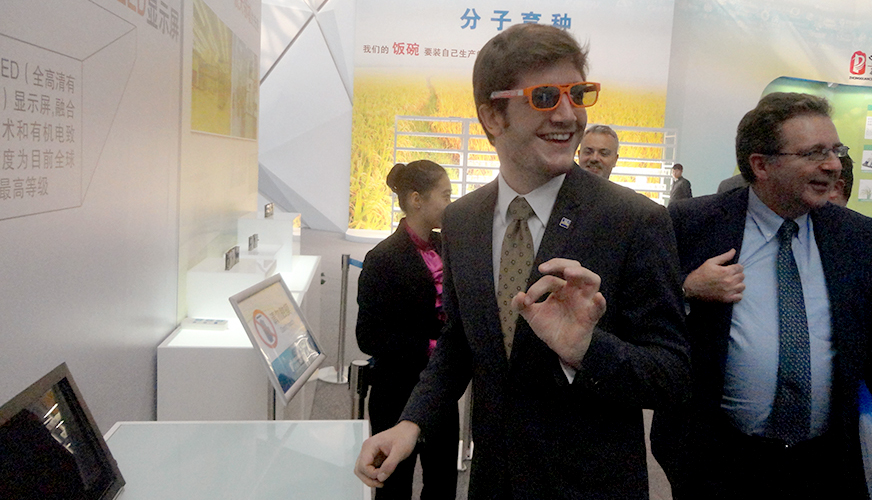 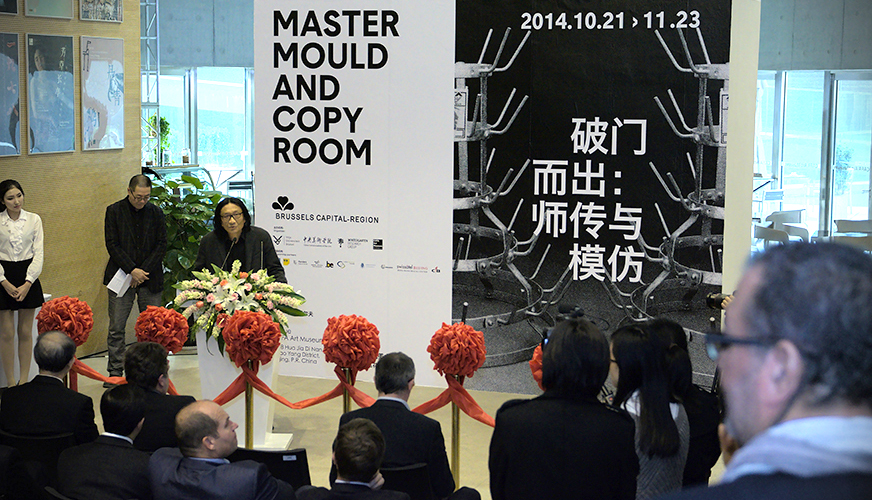 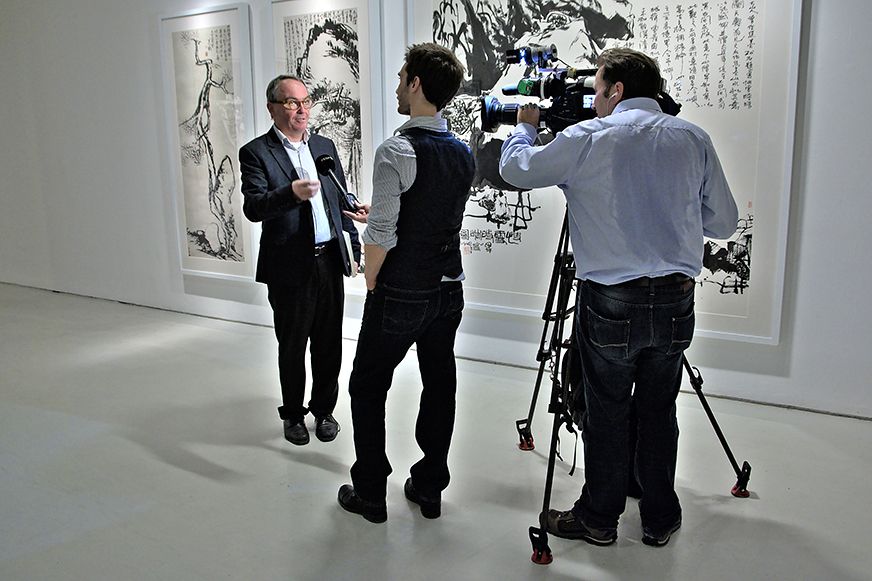 From 20 to 22 October Minister-President Rudi Vervoort led a large Brussels delegation on a mission to the Chinese capital. They were in Beijing on the occasion of the Brussels Days which celebrated the twentieth anniversary of the partnership agreement between the Brussels-Capital Region and the City of Beijing. With an ambitious economic programme, political meetings at the highest level and exciting artistic exchanges the three-day mission was a real success.   Besides the Minister-President, who was accompanied by several of his civil servants, the Brussels delegation also included the alderman for Tourism of the City of Brussels, Philippe Close, the Secretary General of the Brussels Regional Public Service (BRPS), Christian Lamouline, as well as the deputy head of cabinet of the Minister of External Relations, Frank Lelon. Other participants included representatives of the organisers of the Brussels Days, the promotional event that is organised in several large cities, namely Brussels International, VisitBrussels and Brussels Invest & Export.   An ambitious economic programme Several partners of VisitBrussels travelled to Beijing, including the Atomium, Chez Léon, Mini-Europe, Brussels Expo, Brussels Airport and even the Martin’s and Steigenberger hotels. There they met with several potential Chinese partners during the leisure and business tourism (MICE) workshops and seminars that were organised especially for the occasion. The idea is not just to attract more Chinese tourists to Brussels but also to encourage Beijing companies to consider Brussels as a place to do business. Besides the “Invest in Brussels” seminar there were also several visits and meetings with the executives of the three giants that already have a presence in Brussels, namely the Zhongguancun Science Park, Huawei and the HNA Group.     These are respectively the largest science park in China (more than 5,000 companies), one of the leading global players in the sector of telecoms (a workforce of 150,000 – a turnover of 29 billion euros in 2013) and a group which operates in air transportation, tourism and services as well as airport management, logistics, hospitality, retail and finance (15.6 billion euros of turnover in 2013). HNA Group also operates the only direct link between Brussels and China (Beijing) with Hainan Airlines. The Minister-President also got to meet with Brussels enterprises with a presence in Beijing during the lunch at the residence of the Belgian ambassador, His Excellency Michel Malherbe. The latter also organised a magnificent reception, together with Wallonie-Bruxelles International, with several Chinese guests, all washed down with typical Belgian beers!   Political meetings on the highest level On the political level the Brussels mission set the scene for several meetings on the highest level, which is vital in China where good relations with the authorities are essential. The Brussels delegation upon arrival visited the President of the Standing Committee of the Municipal People’s Congress of Beijing, Du Deyin. Minister-President Vervoort and the Secretary General of the BRPS had already met with him in Brussels on 6 June to prepare the Brussels Days. The next morning, the Mayor of Beijing, Wang Anshun, received the delegation even though the fourth Plenary Session of the 18th Communist Party Congress was being held simultaneously. A clear sign of the importance that he attached to the relations between the two capitals! On this occasion Wang Anshun and Rudi Vervoort signed a new Cooperation Agreement between the City of Beijing and the Brussels-Capital Region. Our collaboration covers a wide scope including the environment, urban development, mobility, tourism, the attraction of investments and the promotion of exports, statistics and exchanges on the cultural level and between universities. Three Memorandums of Understanding (MOUs) were signed during this prestigious ceremony. Alain Hutchinson, the President of VisitBrussels, signed one with the President of the Beijing Municipal Commission of Tourism Development, Song Yu. The Secretary General of the BRPS signed two, one between Brussels Invest & Export (BIE) and the Beijing Invest Promotion Bureau, and the other between the BIE and the ZGC Science Park.

Exciting cultural exchanges The twentieth anniversary of the partnership between Brussels and Beijing was also celebrated with several cultural events. One of the highlights of the Brussels Days was the opening of the contemporary art exhibition “Master Mould & Copy Room”. It touches upon the debate, between China and Europe, on intellectual property and all forms of copying. The dialogue between Chinese, Belgian and European artists took place against the backdrop of the prestigious China Academy of Fine Arts. The exhibition’s curator, Professor Hans De Wolf (Vrije Universiteit Brussel), managed to gather the works of twenty prominent artists such as Marcel Broodthaers, Xu Bing, Francis Alÿs, Su Xinping, Joëlle Tuerlinckx, Pangong Kai as well as Marcel Duchamp and one of his mythical “Boîte-en-valises” under one roof. The centrepiece of the exhibition was an “official” copy of Marcel Broodthaers’s “Chambre blanche” which was produced for the occasion by Chinese craftsmen. Truly magnificent art! The opening was followed by a fantastic reception, where Belgian dishes with an original twist were served. There was more art on the programme with a visit to the famous Ullens Center for Contemporary Art (UCCA), which was founded in 2007 by the Belgian Guy Ullens. UCCA is located in the fascinating district 798, a former industrial site that is full of galleries, artists’ workshops, museums, cafes and restaurants. But the extremely busy programme of the Brussels Days would not have been complete without a visit to the impressive Forbidden City, a UNESCO World Heritage Site, and a typical meal in a traditional square house (siheyuan).
Share on Facebook Share on Linkedin Share on Twitter