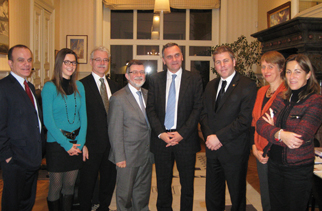 From left to right : Mr Amar, Special Counsellor to the Minister of Tourism of Quebec, Mrs Vrielynck, Attaché to the Cabinet of Minister Cerexhe, Mr Belgue, «Quebec Tourism» Secretary, Mr Sirros, Delegate General for Quebec in Brussels, Mr Cerexhe, Minister for Economy, Employment, Scientific Research and Foreign Trade of the Brussels-Capital Region, Mr Bérubé, Minister of Tourism of Quebec, Mrs Willaumez, Attaché to the External Relations Directorate of the Ministry of the Brussels-Capital Region, and Mrs Claes, the Director of this directorate on Thursday 13 December 2012 during the inauguration of the Bül event.

In December 2012, the Brussels-Capital Region and Quebec celebrated the tenth anniversary of the signing of their cooperation agreement, which coincided with the departure of Christos Sirros, Quebec’s Delegate General in Brussels for the last eight years. On behalf of our region, we wish to thank him for this active and fruitful collaboration and wish him the best of success in his future endeavours. On 18 February, Caroline Émond took over as head of the General Delegation of Quebec. We extend her a warm welcome and hope that our collaboration with Quebec will become even more intense. Our first appointment will be a perfect example of this, with a strong Brussels presence at the biennial Americana fair, the International exhibition of Environmental Technologies in Montreal.
Share on Facebook Share on Linkedin Share on Twitter