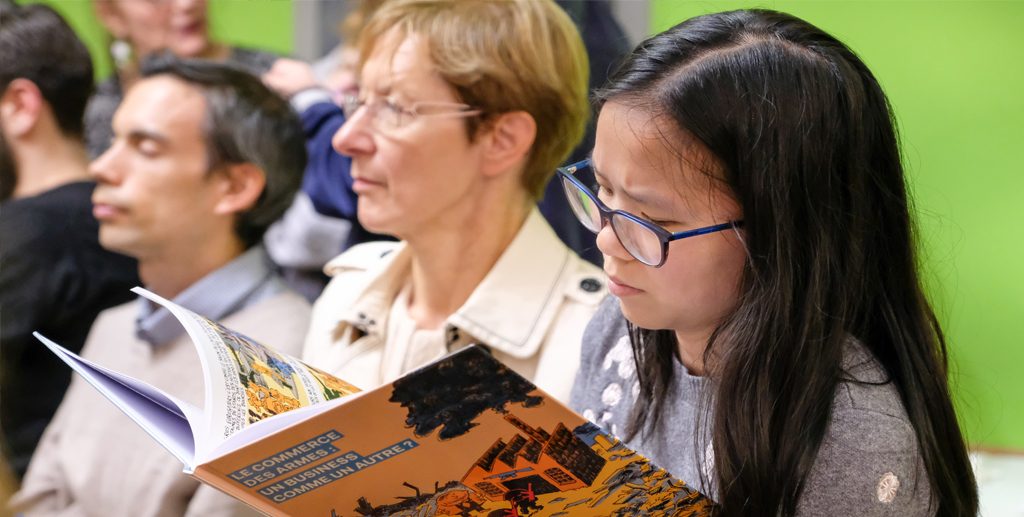 Brussels international selected the proposal of the Group for Research and Information on Peace and Security (GRIP), which it submitted for its 2018 call for projects on the theme of “Global Citizenship and Solidarity”. The purpose of this call for projects was to raise awareness among the young people of Brussels about North/South issues and realities, while focussing on one or several of the United Nations Sustainable Development Goals (SDDs).

Sometimes a drawing is much more effective than a long speech. To illustrate SDD no. 16 “Peace, Justice and Strong Institutions”, the GRIP developed an original and informative proposal, namely to create a comic book about the international trade of weapons and military technology.

The organisation has earned a reputation for its research and publications on the sensitive issue of weapons and their proliferation around the world. On the occasion of its 40th anniversary, the GRIP decided to try something new, publishing a comic book, a medium that holds special appeal for Brussels and Belgian audiences.

Explaining the arms trade in images

Titled “Le commerce des armes: un business comme un autre ?” (The arms trade: a business like any other?), the publication targets a wider audience, including schools and associations. It will be presented during debates in several Brussels schools and shared to local associations and at events in which the GRIP will participate.

Philippe Sadzot (an author, comic book designer, newspaper illustrator and teacher), Benjamin Vokar (the GRIP’s communication and publications officer) and Tomasz (a comic book author and colourist) succeed in explaining a very complicated matter, with complex legal and technical aspects, very simply in their beautifully-illustrated comic book. Their clear, educational messages allow the public to better understand the murky business of international arms sales, albeit on a lighter note where possible.

In addition to discussing the commercial stakes and the issue of employment, the piece of work also suggests several proposals for change. The key message is one of hope, that we may one day live in a world that knows peace, where the arms trade is but a distant memory.

To find out more or to order the comic book (only available in French):
grip.org/fr/BD-commerce-armes