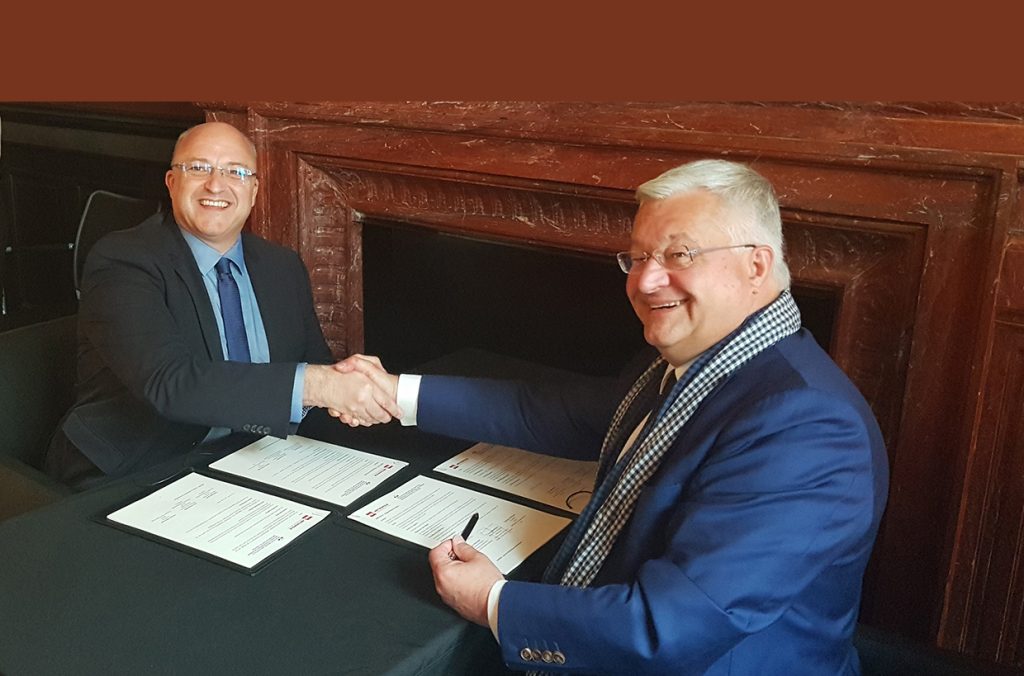 On 2 May, Damien Castelain, the President of the Métropole Européenne de Lille (MEL), visited Brussels to sign a new cooperation agreement with Guy Vanhengel, the Brussels Minister of External Relations.

Lille and Brussels, which are quite close both in geographic and in cultural terms, enjoy a long-standing partnership (since 1996), and are maintaining excellent relations with each other. The two regions were therefore interested in giving new momentum to their cooperation, choosing to orient exchanges on common areas, challenges and interests.

An agreement with three major priorities
Several preparatory meetings were organised in the run-up to the signing of the agreement to draft a text that focused on three contemporary topics: attractiveness, sustainable regional development, and the European Union and the international level.

The reworked agreement, which was drafted by experienced leaders in their respective fields (visit.brussels, perspective.brussels, Brussels International and its delegation to the European Union on behalf of Brussels), paves the way for focused thematic discussions and tangible achievements. The dedicated working groups will work around tourism, major events and projects, urban planning and renewal, mobility, and several European and international programmes.

Mobility, the topic of several fruitful meetings
Whereas Damien Castelain, the President of the MEL, and the Lille delegation mainly travelled to Brussels to sign the new agreement, the visit also proved a good opportunity to hold several constructive meetings on the topic of mobility. This is a very important topic for both regions.

During a working lunch, Pascal Smet, the Brussels Minister for Mobility, discussed the city’s plans to solve  traffic congestion, as well as the low emission zone that was recently established in Brussels. The fruitful exchanges with the Lille delegation continued in the afternoon, alongside a specific meeting of mobility experts, including the Director-General of Bruxelles Mobilité and the Director-General of public transport company Société des Transports Intercommunaux de Bruxelles (STIB).

The meetings were organised at the visitor centre of the Brussels-Capital Region (BIP) for a very specific reason. The BIP is currently hosting an exhibition to celebrate the 30th anniversary of the Brussels-Capital Region and the 150th anniversary of tramways in Brussels. The exhibition focuses on this simultaneously historic and contemporary means of public transport, and features old models of tramways as well as a life-size scale model of a “new generation” tram.

The signing of the cooperation agreement
The day ended with the signing of the actual cooperation agreement, in the presence of the Minister of External Relations of the Brussels-Capital Region. This ceremony, which was held in the Leopold Hall of the Council of Brussels Ministers, rapidly made way to a jovial exchange of gifts, which highlighted the traditions, icons and local institutions of the two regions.