The group on Temple Mount.

Israel-Palestine : to better understand the issue

From 9 to 16 February, forty-seven young pupils from four Brussels schools, with diverse socio-demographic profiles, travelled to Israel and Palestine to gather first-hand information about the situation on the ground. A group of 70 participants visited, met with, analysed and shared experiences relating to various themes in the margin of the Israeli-Palestinian conflict. 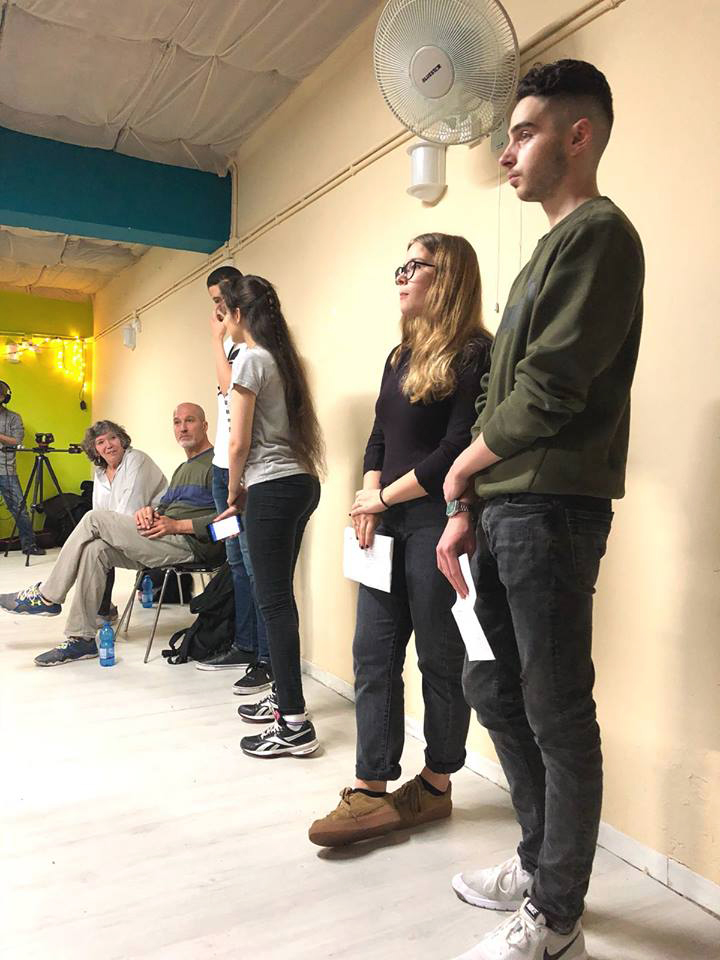 Meeting with the activist Yonatan Shapira of the organisation “Combattants for Peace” in Tel Aviv. 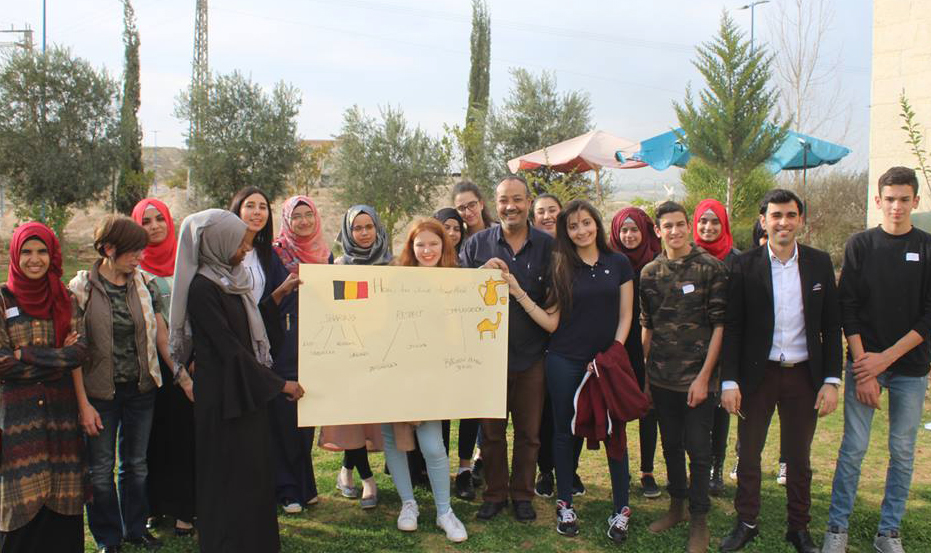 Intercultural exchanges with young pupils of the Bedouin community at the Hura centre. The youngsters worked together in small mixed groups, with Belgian and Bedouin pupils, discussing various issues relating to interculturality in Israel and Belgium and suggesting solutions. 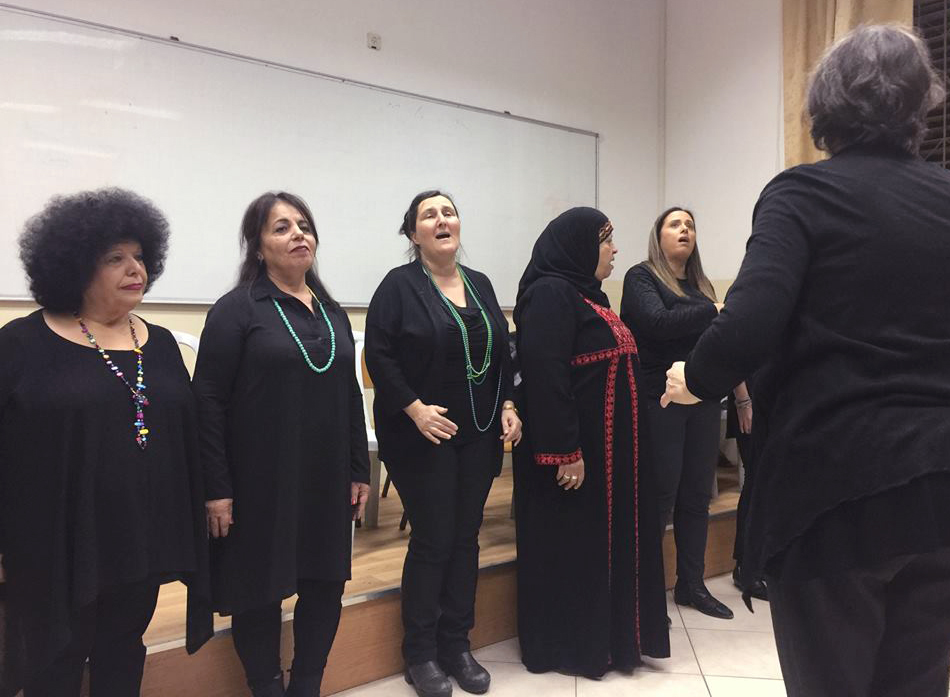 The RANA women’s choir in Jaffa. 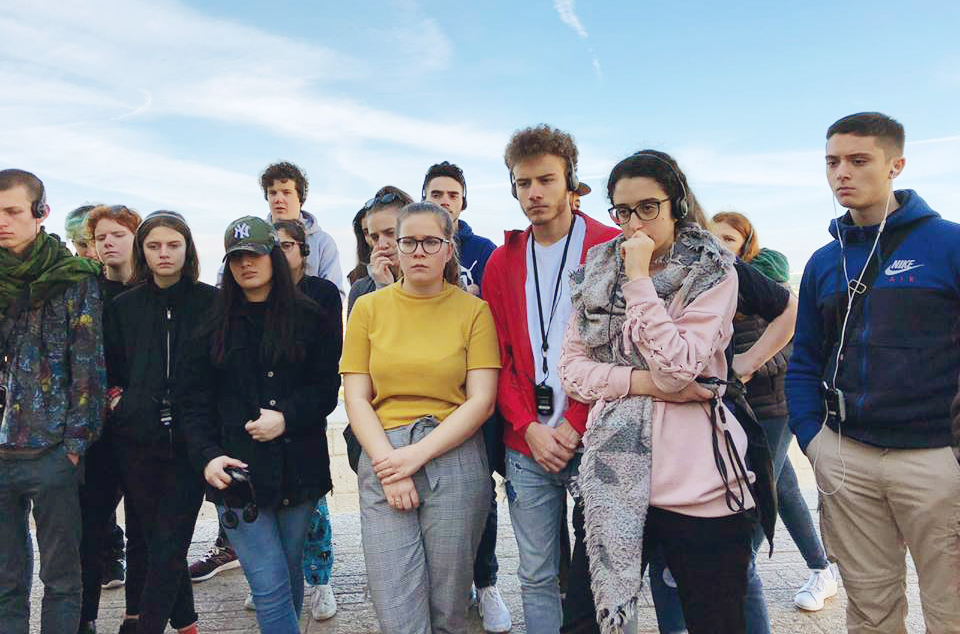 The audience during the public speaking competition or verbal sparring at the Notre Dame of Jerusalem Center. The Belgian consul, Danielle Haven, is pictured in the foreground.

“Israel-Palestine: to better understand the issue” was developed by the not-for-profit association “Actions in the Mediterranean” (AIM). The project was devised by the Brussels regional MP and Senator Simone Susskind and aims to reduce the hatred and the radical positions that are also adopted in Brussels in relation to the conflict between Israel and Palestine. The project aims to combat stereotypes and generalisations as a result of this conflict. It implicates young people by turning them into ambassadors of coexistence who can help ease the tensions between communities, more specifically the Jewish and Arab-Muslim communities.

The project, which is organised for the fourth year, is developed on different levels and includes a trip to Israel and Palestine. The field trip, which took place in February, took five months to prepare in Brussels. The organisers received support from the Minister of External Relations of the Brussels-Capital Region, Guy Vanhengel, and Brussels International.

As soon as they arrived in Tel Aviv on 9 February, the young pupils met with the activist Yonatan Shapira of the organisation “Combattants for Peace”. Yonatan argued in favour of a dialogue between Israelis and Palestinians. She thinks that it is vital that every citizen in the world, including young Belgians, should be aware that there are several ways in which they too can intervene in this conflict. This includes refusing to support arms sales to Israel or adopting a pro-peace position rather than taking sides in the conflict.

The next day, the group met with Negev Bedouin activists, who are Israeli citizens and who are threatened with destruction and expulsion. They explained their economic difficulties and precarious situation. The young Belgians then discussed various topics with the young Bedouins, including interculturality, education and living together.

That same evening, the group attended a fantastic concert by Muslim, Jewish and Christian women from Jaffa, followed by a discussion between the choir members and the youngsters on the links between art and politics and opportunities for building bridges.

On 11 February, the group returned to Tel-Aviv to visit the city and for some verbal sparring with mixed teams, comprising Belgian students and students of Gymnasia Hertzlya, an Israeli secondary school.

The theme on 12 February was occupation. The youngsters were separated into two groups. One group visited East Jerusalem, to understand colonisation and the difficulties of cohabitation. The other group travelled to Hebron to experience the extreme situation of occupation first-hand. The two groups met up later in the day to discuss their experiences.

That evening, a moving meeting was organised with Bassam and Rani, two fathers, one an Israeli, the other a Palestinian. They both lost their daughters in the conflict and have been lobbying hard to end the occupation, advocating in favour of a dialogue and peace through encounters.

The next morning the young people reflected on the complex theme of refugees. They visited Aida camp and met with young pupils of the UNRWA school. They also learned about an association called NOOR, which takes care of children with mental and physical disabilities.

A visit to the Yad Vashem Memorial

On 14 February, the group was in Jerusalem, where they visited two schools: a mixed, bilingual school (Arab-Hebrew) and a school for the Palestinian upper classes in East Jerusalem. Their visit to the Yad Vashem Memorial was a very moving experience and another highlight of their day.

On the last day, the final of the public speaking competition was held. The delegations of young Israelis and Palestinians they had met earlier in the week were invited to compete with the Belgian pupils. The event was organised in partnership with the Consulate-General of Belgium in Jerusalem. François Tulkens, a former judge of the European Court of Human Rights, was on the jury panel among others.

It is safe to say that this trip was an unforgettable, transformative and overwhelming experience for the young Brussels students! But their experience does not end here, as the youngsters will be invited to become “Ambassadors of Nuances” in Brussels. They will be asked to talk in other schools, discussing their experiences, with a film that was made during their trip. An excellent opportunity for debate with other young people!