Family photo of the Brussels and international chefs.

Foodies and gourmets flock to the sixth eat! BRUSSELS festival

Demanding palates across Brussels eagerly await September, when chefs from around the world traditionally meet in our capital, representing their cities, provinces and regions in the international village of the annual eat! Brussels festival. This year, the event ran from 7 until 10 September. 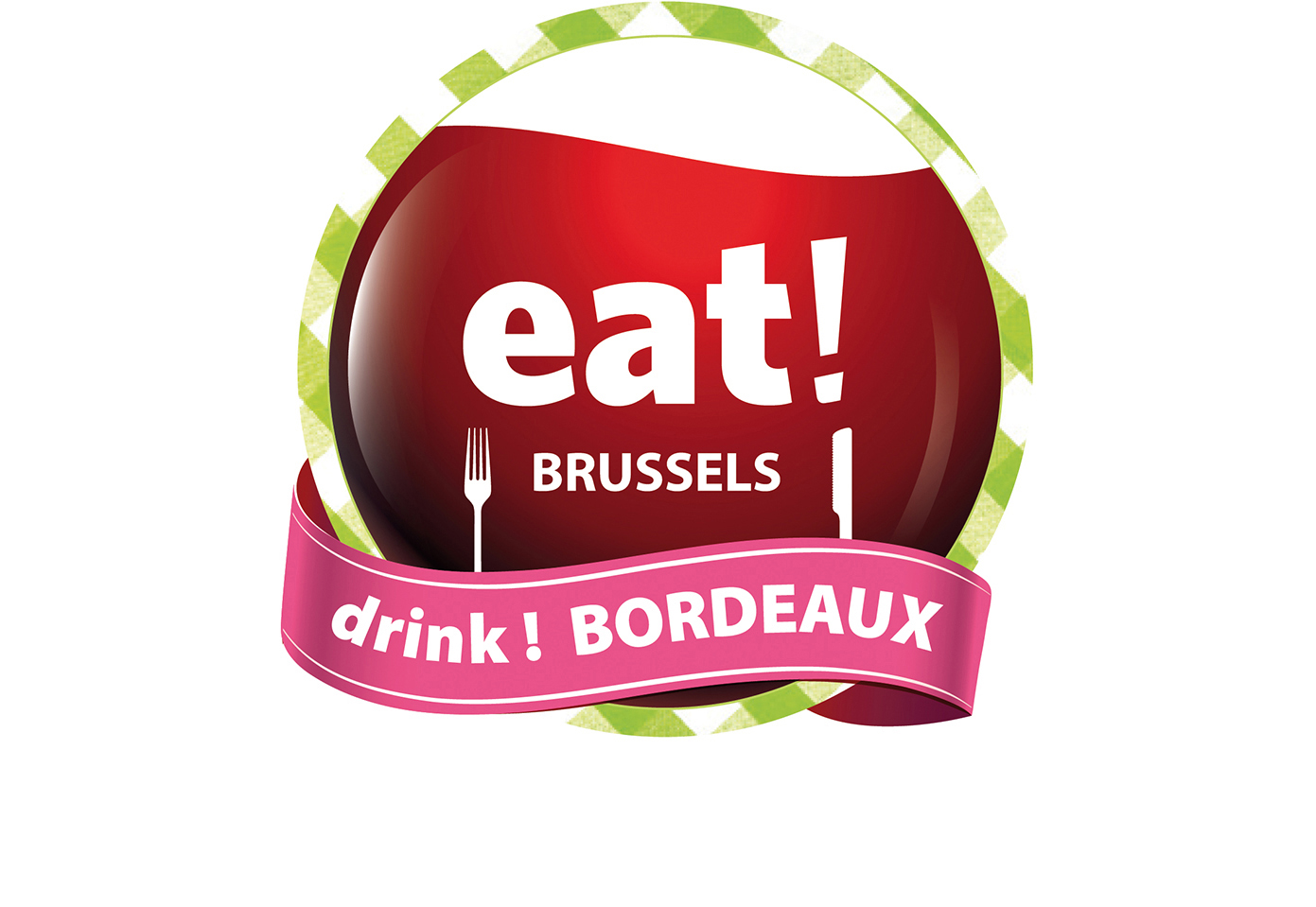 Minister-President Rudi Vervoort and Daniel Verheyden, Brussels International, meet with the delegation of Beijing Tourism during the opening event of the eat! BRUSSELS festival.

A woman in traditional costume welcomes visitors in Beijing’s booth!

This year, the dynamic team of the PRL la Pologne restaurant represented the Masovian Voivodeship.

Alain Juppé, the mayor of Bordeaux, samples mendiants, a typical French confection, made with chocolate and crickets in the booth of the Brussels-Capital Region. He is surrounded by the teams of Brussels International, Choco-Story and Little Food in the photo.

Guy Vanhengel, the Minister of External Relations, presents the iris in the colours of Ljubljana to the representatives of the Slovenian capital, Katarina Marinović, the Coordinator of the Taste project within the Tourist Office and Janez Bogataj, professor of ethnology at the University of Ljubljana.

Every year, eat! BRUSSELS, the festival of Brussels’ best chefs, highlights our region’s culinary diversity. But as our dynamic and open-minded city and region, eat! BRUSSELS prefers a broader outlook, offering visitors the opportunity to sample food from around the world at this popular festival.

Ever since eat! BRUSSELS was first organised six years ago, the international partners of the Brussels-Capital Region have been invited to present their local specialities and products in an international village. This year, nine partners replied to the invitation of the Minister for External Relations and Brussels International, including the cities of Beijing, Ljubljana, Berlin, Sofia and Kiev, the Masovian Voivodeship (the capital-region of Pologne), Sichuan province, Quebec and the Region of Rabat-Salé-Kénitra.

It was the German capital’s first time at the festival, and a special occasion at that, as we are celebrating the 25th anniversary of our bilateral relations this year. The public also had the opportunity to taste some Ukrainian specialities in the booth of the City of Kiev after five years of absence. Kiev also took advantage of the opportunity to send an official delegation to our region, like the Region of Rabat-Salé-Kénitra and Beijing.

Once again, the international village of eat! BRUSSELS had plenty of culinary surprises in store for the many gourmets who were in attendance. Find out more below…

Beijing This year, eat! BRUSSELS welcomed the team of an acclaimed traditional restaurant that organises dining shows which highlight the history of Beijing’s local cuisine. The crowd was welcomed by hostesses in traditional costume, sampling traditional dishes such as sweet and sour pork meatballs and other more original suggestions, including a Chinese-style hamburger.

Sichuan Loyal visitors queued at the booth of Daronghe restaurant from Chengdu, which has been a popular guest at the festival for many years already. This year, they returned with a new menu full of dishes that are always rich in flavour, including some delicious ravioli and plenty of vegetarian options.

The Region of Rabat-Salé-Kénitra Visitors never tire of the delicious couscous of Samraa caterers from Rabat, largely because of the subtle spice blends and the light and fluffy couscous they serve. The tiny almond and orange blossom pastries for dessert were simply heavenly.

Quebec This is the sixth time that Quebec has joined us at the festival! This year, they rose to the occasion, reinventing their classic dish, the poutine, every day with different products. Variants included the “Poutine of the Great North” with thin slices of smoked salmon drizzled with Hollandaise.

Ljubljana Jorg Zupan, the chef of Atelje restaurant, served ravioli with Mohant cheese and parsley, frog’s legs and a garlic stew, highlighting the bold flavours that are so typical of his local cuisine. Mohant, which is produced on mountain farms, has a very pronounced taste and is one of the first Slovenian cheeses to be awarded an AOC by the European Union.

Sofia The dynamic and smiling team of Mekitza & Café also returned this year, bringing even more of their delicious local food with them. To make the event more fun, they served different mekici (flat doughnuts) and banitsa (spiral-shaped cheese pies) every day, with various salty and sweet fillings.

Mazovia Mazovia is renowned for its traditional hospitality and generosity. This year, the PRL la Pologne restaurant served a cornucopia of the region’s specialities, including pierogi (Polish ravioli), sauerkraut and a line-up of original and tasty soups that we really enjoyed!

Kiev The chefs of Kupidon restaurant demonstrated how diverse Slavic cuisine really is, with its traditional borscht and its famous Chicken Kiev. It was great to have the opportunity to sample these typical dishes again, as the city had not participated in the festival since 2012.

Berlin This was Berlin’s first time in the international village, which is why it served a real classic to the visitors of eat! Brussels, namely its famous “Königsberger Klopse”, or grilled meatballs in a creamy caper sauce, with mashed potatoes, croutons, parsley and caramelised onion. Those who were tempted to give this traditional dish a taste were delighted with their new discovery.

This year, our region celebrates the anniversary of the signing of two bilateral agreements. Berlin became a partner of the Brussels-Capital Region twenty-five years ago, an occasion which we celebrated during the eat! BRUSSELS week with Michael Müller, the mayor of Berlin while enjoying some of the city’s outstanding food, DJ sets and plenty of other Berlin specialities during Berlin Lab in Les Halles Saint-Géry. In October, a large Brussels delegation led by Minister-President Rudi Vervoort travelled to Berlin for the Brussels Days, which have a well-filled and varied programme in store for the people of Berlin.

We are also celebrating the twentieth anniversary of our bilateral agreement with Kiev and hope to sign a new agreement soon with the magnificent capital of Ukraine, welcoming its mayor, Vitali Klitschko to Brussels. An official delegation of the City of Kiev attended eat! Brussels.

EVENTS IN THE INTERNATIONAL PAVILION

Besides welcoming the delegations of our partners, the Brussels International Pavilion also hosted various events:

The Iris ablaze with colour This year, the Brussels-Capital Region wanted to highlight the presence of its partners at the festival by presenting them with an unusual gift. The artist Harwand Red created nine artworks that celebrate their partnership with our region, which were all inspired by the emblem of the Brussels-Capital Region. Each partner thus received a painting of an iris, in the colours of their region, which is a great way of highlighting the strength of our partnerships with a symbolic gesture.

Chocolate and crickets in the booth of the Brussels-Capital Region Another fun, innovative and forward-looking partnership was the pairing of Choco-Story, a Brussels family company that promotes quality Belgian chocolate, with Little Food, a newly-established company that is trying to change the way we think about eating crickets, which was facilitated by Brussels International. Their partnership culminated in an original live cooking event, during which the audience had the opportunity to taste chocolate with… crickets! Some of the audience were quite taken aback, while others were bold enough to give this interesting delicacy a taste!

Join us for the seventh eat! Brussels festival in September 2018!