The delegation of the region of Rabat-Salé-Kénitra with the Brussels International team.

The 2017 eat! BRUSSELS culinary festival once again proved a fantastic opportunity to strengthen the already strong ties between the Brussels-Capital Region and the Region of Rabat-Salé-Kénitra. 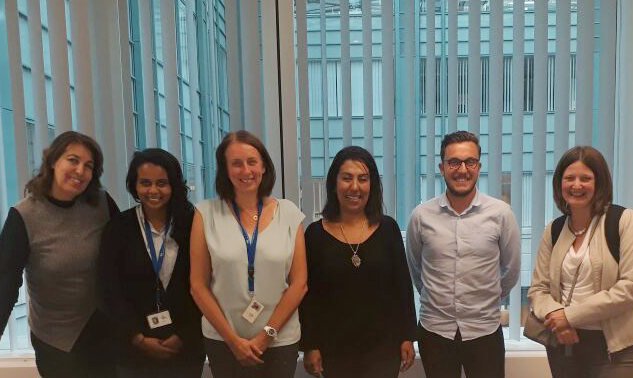 Working meeting at the Directorate for Equality of the Brussels regional public service, attended by Sophie Willaumez of Brussels International.

Exchange of gifts. Guy Vanhengel, the Minister for External Relations, Anne Claes, the Director of Brussels International, His Excellency Mohammed Ameur, the Moroccan ambassador to Belgium, Laila Moulat and Naima Bouyaghroumniles, the representatives of the Regional Council of Rabat-Salé-Kénitra and Frank Lelon, the Deputy Director of the Cabinet of Minister Vanhengel.

Following the ongoing process of advanced regionalisation in Morocco, the Region of Rabat-Salé-Kénitra now has acquired more competences. We were thus able to share the expertise we can offer as a region to our Moroccan partners in terms of achieving their new regional development plan during several working meetings in the margin of the Eat! BRUSSELS festival.

During the meetings with ACTIRIS, Impulse.brussels, Perspective.brussels, the BRIC and the Directorate for Equal Opportunities of the Brussels regional public service, Brussels International and the representatives of the Regional Council of Rabat-Salé-Kénitra were able to identify priorities in their cooperation for the next few years.

The members of the Moroccan delegation were also able to see first-hand what a crowd-pleaser the culinary booth of their region was – as usual – at eat! BRUSSELS.