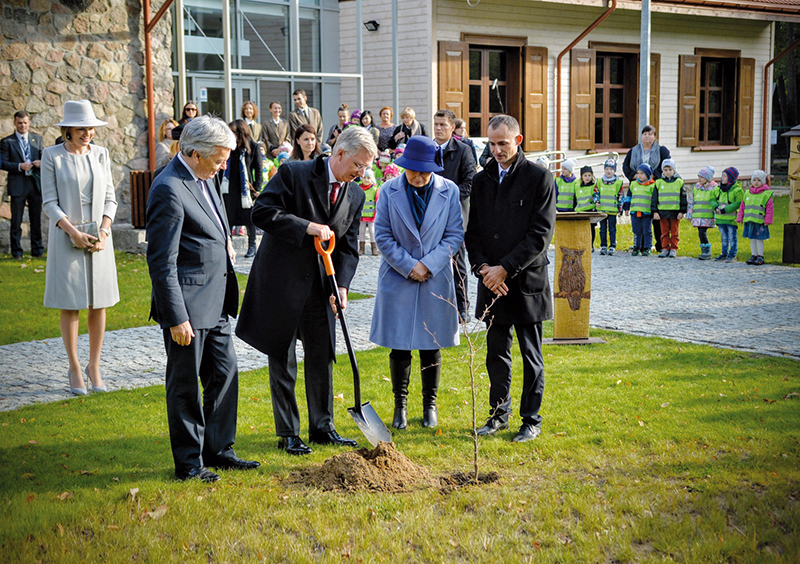 The King plants a beech tree while Queen Mathilde, the Belgian Foreign Minister Didier Reynders, the mayor of Warsaw Hanna Gronkiewicz-Waltz and the Director of the municipal forests of Warsaw Karol Podgórski look on.

The King and Queen listen to the speech of the mayor of Warsaw, Hanna Gronkiewicz-Waltz.

The Minister-Presidents of our three regions plant a beech tree together in front of a pack of journalists.

Arrival of King Philippe at the reception of the Belgian Embassy in Warsaw.

Queen Mathilde during the reception at the Belgian Embassy in Warsaw.

From 13 until 15 October 2015, the King and Queen undertook a state visit to Poland. Rudi Vervoort, the Minister-President of the Brussels-Capital Region, accompanied them.   On the occasion of this journey to the home country of the mother of Queen Mathilde, our sovereigns were accompanied by representatives of the federal government and minister-presidents of the federated entities. Minister-President Rudi Vervoort represented the Brussels-Capital Region in this delegation which also included companies and universities from all three regions. The Brussels-Capital Region was implicated on two occasions during the state visit. On 14 October, Brussels Invest & Export organised a productive power lunch on the topic of investments, in the famous Bristol Hotel in Warsaw, with Belgian and Polish businessmen. That same afternoon, on the initiative of Brussels International, the King and Queen visited Kabaty Forest and the new forest education centre in Warsaw, along with Minister-President Rudi Vervoort and the entire official delegation. There they attended a presentation on a European project for having the old beech wood forests recognised as UNESCO World Heritage. Belgium (all three regions) and Poland are partners in this project. The magnificent Sonian Forest, which essentially is made up of beech trees, is managed by all three Belgian regions. The event ended with a tree planting ceremony. The King, the Mayor of Warsaw, Hanna Gronkiewicz-Waltz, and the Minister-Presidents of the regions and communities of Belgium, planted six young beech trees, which were donated by Brussels Environment. We hope these majestic trees, which symbolise the friendship between Poland and Belgium and the harmonious collaboration between the regions of our country, will enjoy a long life. This very symbolic event was the only event that was attended by both of our sovereigns, outside of the official visiting programme. It was also the most widely covered event by the media during this state visit. Minister-President Vervoort took advantage of the opportunity to meet with the Mayor of Warsaw and discuss the future of the partnership between our two capitals with her. He then briefly journeyed to Gdansk with our economic and trade attaché, Nicolas Nève, to visit several projects in which Brussels companies are involved.
Share on Facebook Share on Linkedin Share on Twitter