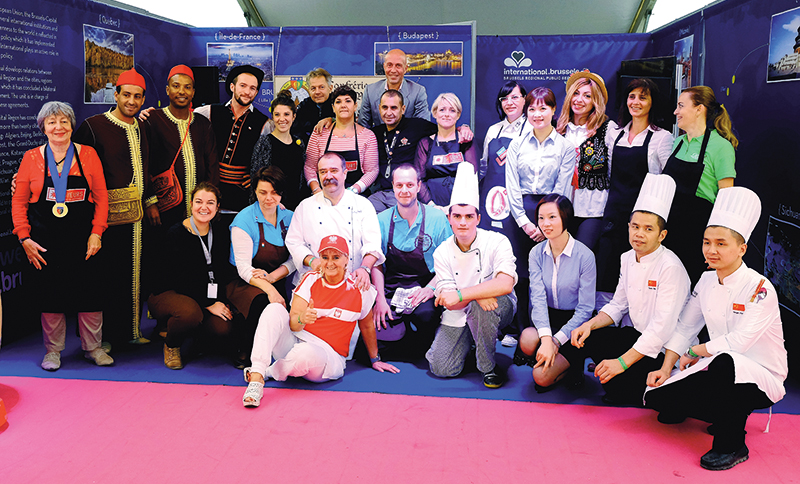 Group photo of the members of the ten delegations.

The people of Brussels flocked to eat!Brussels 2015in droves again 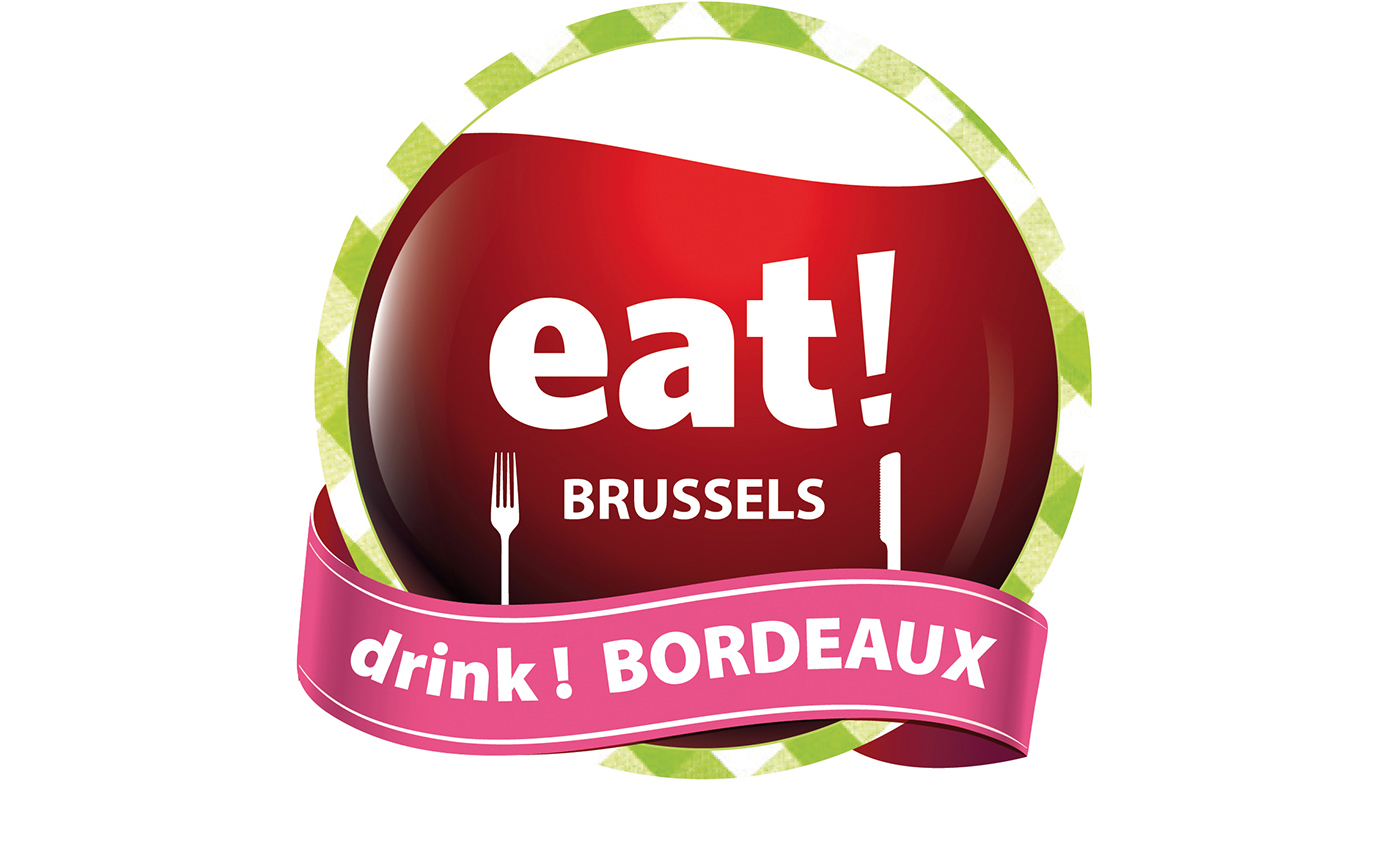 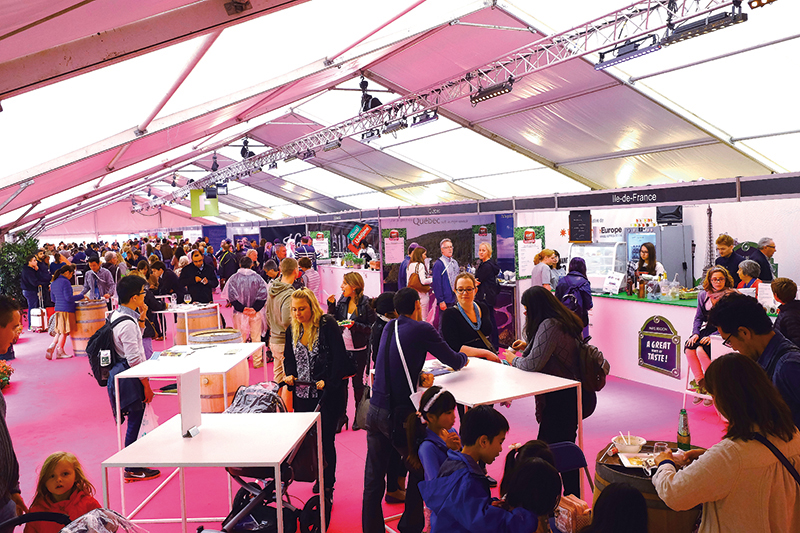 There were large crowds in attendance in the international village. 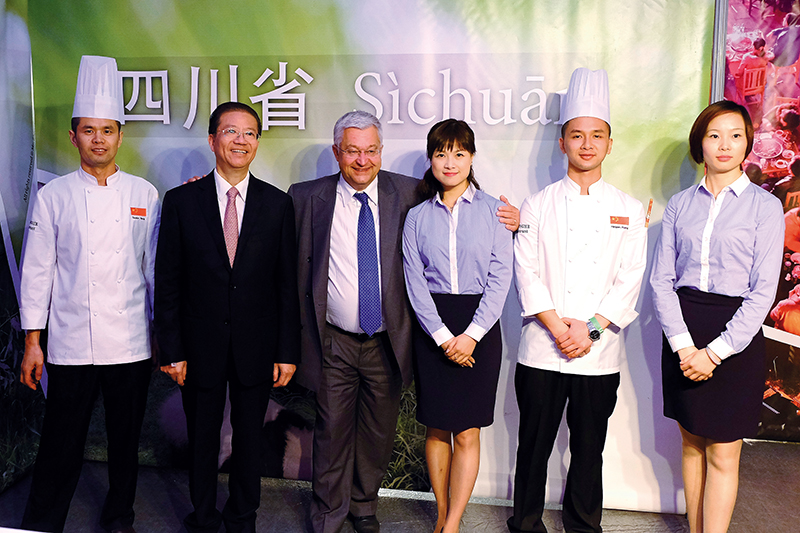 Guy Vanhengel, Minister of External Relations and Peng Yu, Vice-President of the Szechuan Provincial Assembly, with the team from Szechuan. 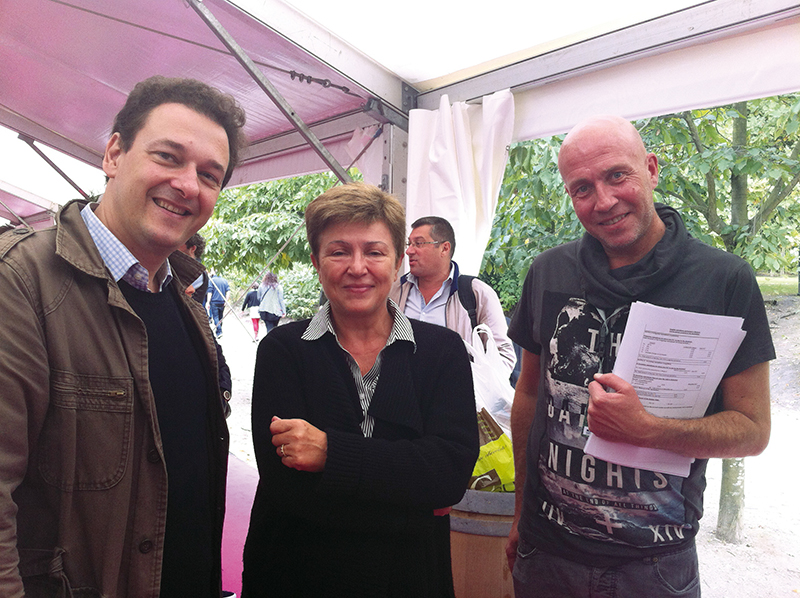 Kristalina Gueorguieva, Bulgarian Vice-President of the European Commission, visiting the stand of her countrymen from Sofia, with Geoffroy Clerckx, Deputy-director at Brussels International and Jean-Michel Verdin. 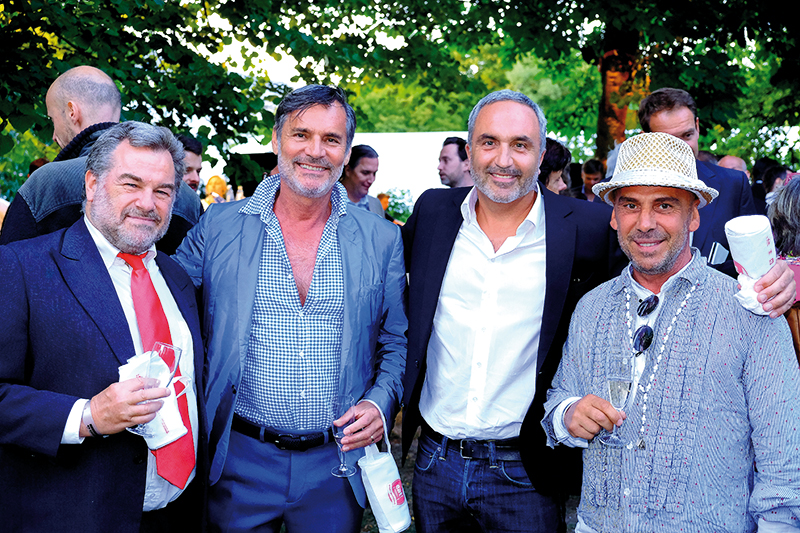 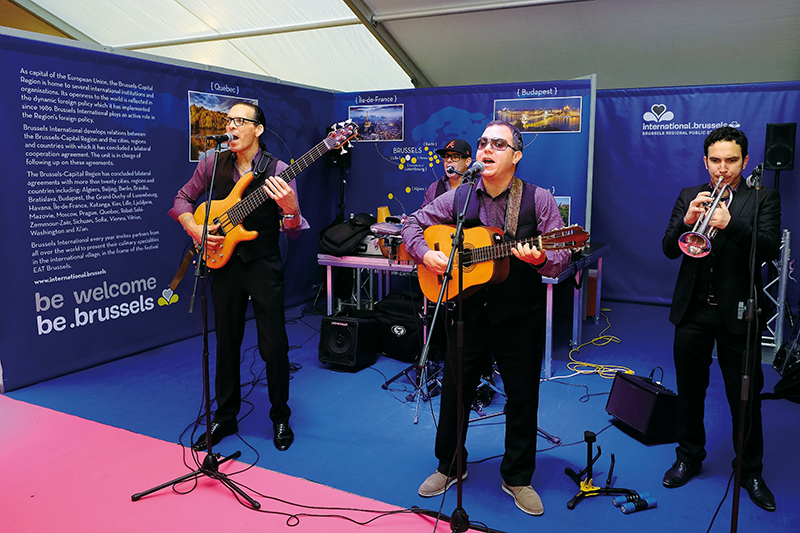 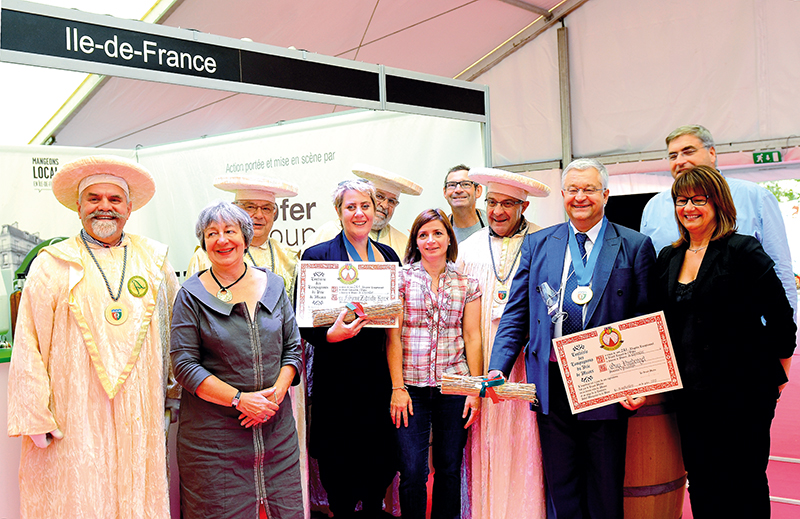 The Minister of External Relations inducted into the Confrérie du brie de Meaux. 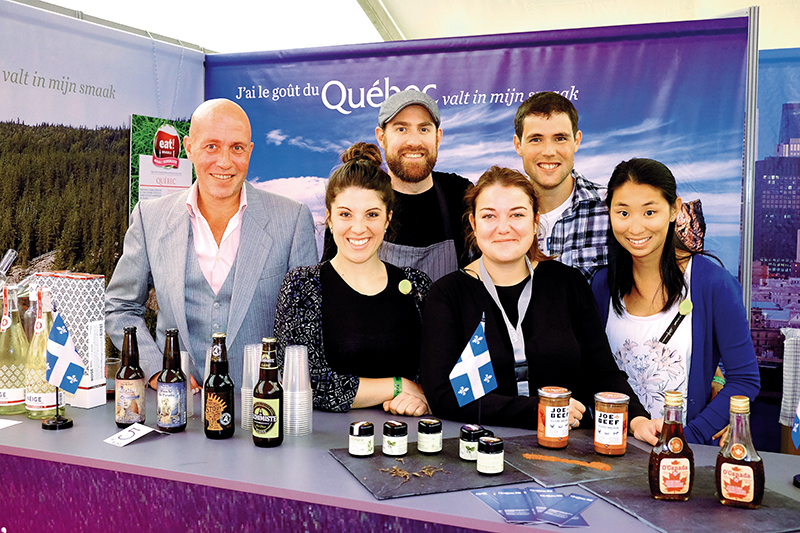 The energetic team from Quebec with Maaike Siaens and Jean-Michel Verdin, Brussels International.

From 10 until 13 September, the Brussels restaurant festival, eat!Brussels, set up its tables in the Park of Brussels. Ten international partners of the Brussels-Capital Region manned the kitchen.   For four consecutive years, eat!Brussels is the must-attend event in September, for people who enjoy a convivial atmosphere and good food. For four days, food lovers of all ages celebrate good food, whether local or more exotic. Why? Because Brussels International invites partners from all over the world to present their specialities at the festival, with the support of the Regional Minister for External Relations. This year ten cities, provinces and regions replied to the invitation, while the spotlight was on the winemakers of the Bordeaux region.   4 continents on the menu ! The gastronomic village of the partners of the Brussels-Capital Region once again offered visitors the opportunity to enjoy tastes from all over the world without leaving Brussels, while witnessing the dynamics of our Region first-hand.   Africa Region of Rabat-Salé-Kénitra Fragrant tajines and couscous, small Moroccan pastries, tea. Nobody could resist the lovely stand of Samraa caterers from Rabat.   Americas Havana This was the first time that the Cuban capital was in attendance at the festival. The Havanese chef Carlos Arbelo Marin titillated our taste buds serving traditional classic Cuban cuisine with a twist. Of course no meal would be quite complete in the city of Hemingway without a refreshing mojito! Quebec The Quebec chefs Emilie Althot-Robitaille and Marc Lamarre represented their region with a delicious salmon gravlax with northern spices and a tasty moëlleux, doused liberally with a warm maple syrup sauce and cider ice-cream…   Asia Beijing Dim sum and deep-fried shrimp with a sweet and sour sauce revealed the complexity and sophistication of the flavours of the cuisine of China’s capital city, which was represented at the festival by Beijing Hotel. Province of Szechuan Szechuan cuisine is well-known for its spicy food, but besides this it also tends to surprise people because of the authenticity and subtlety of its flavours and fragrances. As was the case in past years, the well-known Daronghe restaurant from Chengdu represented the province. On the sidelines of eat!Brussels, a delegation of the province, led by Peng Yu, the Vice-President of Szechuan Provincial Assembly, met with the Brussels regional authorities. The province and our region were those who were able to set out the themes for our future collaboration, while celebrating the 20th anniversary of our fruitful partnership this year.   Europe Budapest The Hungarian capital surprised visitors with its inventive recipes based on foie gras, as well as a very trendy twist on its famous goulash and with its fruit spirits and beers. It is easy to understand why Budapest is also frequently called the Paris of the East. Region of Île-de-France The region on this occasion was represented by the Regional Centre for the Valorisation of agricultural and food innovation (Cervia). It treated visitors to various local products including foie gras, ham from Paris and the cheeses of its region, including its famous Bries. Ljubljana Gostlina Na Gradu, one of the best restaurants of our Slovenian partner, pampered Brussels taste buds with its traditional cuisine. The product in the spotlight was Carniolan sausage  (Kranjska). Voivodeship of Mazovia True to its reputation, Mazovia shared its generous cuisine with visitors, including pierogi, ravioli stuffed with meat, or bigos, a traditional fermented cabbage and sausage stew with mushrooms. Sofia Rai catering proposed a wide range of dishes and let us discover Bulgarian cuisine, which is unjustly overlooked. Baked stuffed figs with pastarma, sheep’s cheese and forest honey or yoghurt panna cotta, hazelnuts and peaches. Flavours which explode in your mouth.   Stand of the Brussels Region The Brussels-Capital Region was also represented at eat!Brussels. A Brussels village was set up where visitors could meet with the finalists of the Creativity Call Brussels Urban Food 2025 project and discover what their presentation is at the Wold Expo in Milan. Another illustration which is just as iconic, playful, innovative and forward-looking: Brussels International asked a Brussels family business, an institution that is truly devoted to the promotion of quality Belgian chocolate, Choco-Story, and a fledgling company that markets crickets called Little Food. They partnered in an original live cooking event, with tastings of chocolates with crickets. A surprising experience for many visitors, and a thrill for the less adventurous gourmet!   More than just a food event Our partners also contributed to the atmosphere at the festival by inviting artists to join their culinary delegation. The Szechuan Art Vocational College for example proposed a programme with mime, dance, music and acrobatics. Cuba, where music is simply everywhere, surrounded the team from Havana with musicians. The Tumbao Cubano and El Trovador Pedro Díaz Pucho made hips sways, and feet tap. The atmosphere was quite different in Budapest: ah, the Slavic soul… The accordionist Tamás Kéméndi bewitched the international village with his melancholy melodies. The region of Île-de-France did not rest on its laurels either. The “Confrérie du brie de Meaux” surprised the audience with its strange hats in the shape of… a certain well-known cheese. The Minister of External Relations was also inducted as a knight into the brotherhood on this occasion. With eat!Brussels, the Brussels-Capital Region every year confirms its status as a cosmopolitan city, where people enjoy good food and the good life. Undoubtedly the fifth edition of the festival, which is already scheduled for 2016, will be an equally great success.
Share on Facebook Share on Linkedin Share on Twitter