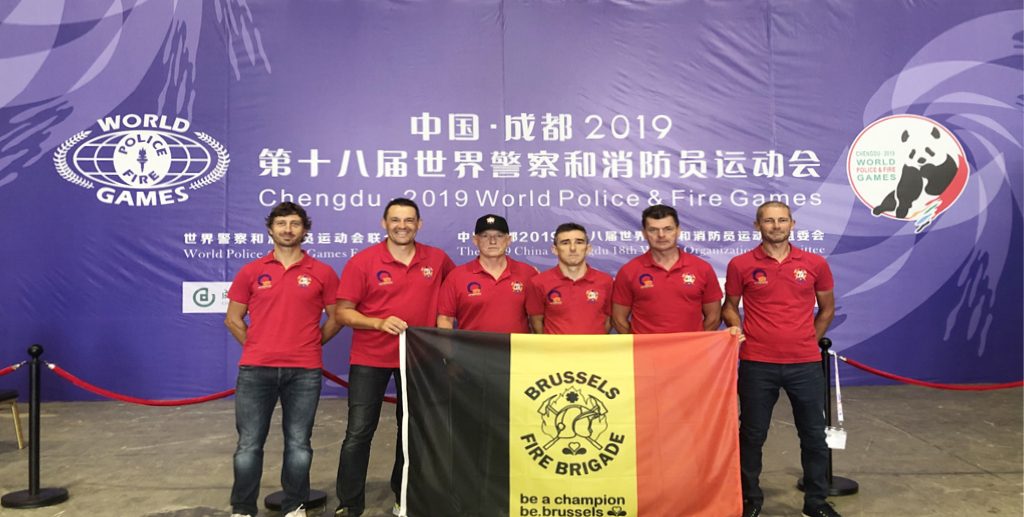 The arrival of the Brussels firefighters in Chengdu.

World Police and Fire Games 2019: a record number of medals for the firemen of Brussels!

In August 2019, the Chinese megacity of Chengdu hosted the 18th World Police and Fire Games (WPFG). A delegation of 38 Brussels firemen travelled to the capital of Sichuan Province, along with 11,000 athletes from around the world.

Brussels International and hub.brussels took advantage of this global gathering at the WPFG to promote the Brussels-Capital Region (BCR) and strengthen the ties with Sichuan, one of the region’s oldest bilateral partners. 2020 marks the 25th anniversary of the collaboration on multiple fronts between the BCR and the Chinese province. This silver anniversary will be celebrated both in Chengdu and in Brussels, with all the pomp and circumstance for such an important jubilee.

The Best of Brussels in Chengdu

The Region was able to showcase its assets to guests (including officials from Sichuan and Chengdu, as well as tour operators and journalists) during a gala dinner, titled ‘Best of Brussels’, which was covered by Chinese and Brussels media. A journalist of the Brussels regional TV channel Bruzz accompanied the delegation to Chengdu.

Every effort had been made to turn this event into a phenomenal success, including a magnificent venue in Chengdu’s trendiest district Tai Koo Li, an original decoration scheme which had been created for the occasion, and typical Brussels dishes by Chef Alain Boschman.

Brussels firefighters, the real stars of the World Police and Fire Games 2019

The participation of the Brussels firemen in the WPFG did not go by unnoticed: taking home a record number of 45 medals, they actually succeeded in breaking their record at the LA games in 2017 (30 medals). The team won several of these medals during the terrible Stair Race event, which required firefighters to walk up the stairs of a 53-storey skyscraper in Tianfu (in full gear for the most extreme version of this competition) in temperatures of over 30°C!

The Brussels firefighters also visited a fire station in Chengdu, which was a memorable occasion and an excellent opportunity for exchange between the firemen of the two cities.

In addition to attending the WPFG events, the delegation also met with officials from Sichuan during several meetings and working lunches. The Brussels delegation also made several field visits, including to the Shude High School, which organises student exchanges with the Meertalig Atheneum, a secondary school in Woluwe, and to an association that promotes Freinet pedagogy in China and hopes to open its first school there soon.

Next up: the WPFG in Rotterdam

The participation in the WPFG also provided an opportunity to strengthen the ties between Brussels International and the Brussels firefighters, paving the way for future joint initiatives. Both organisations also established excellent contacts with the organisers of the WPFG. Our firefighters are getting ready to beat new records during the next games, to be held in Rotterdam in 2021. And perhaps, who knows, one day the WPFG will be hosted in Brussels?