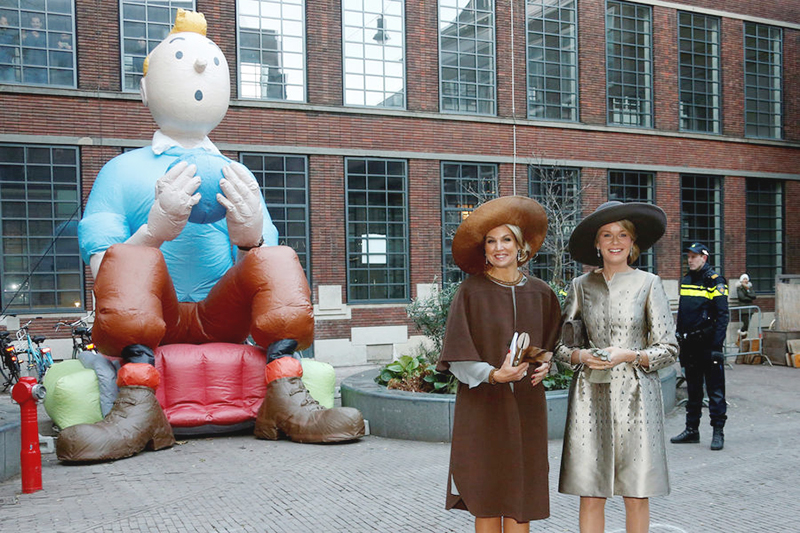 Queen Mathilde and Queen Maxima in front of the Tintin balloon.

From 28 until 30 November 2016, the King and Queen of Belgium paid a state visit to the Netherlands. The Minister-President of the Brussels-Capital Region, Rudi Vervoort, accompanied them, along with several CEOs and rectors of Brussels universities and university colleges. 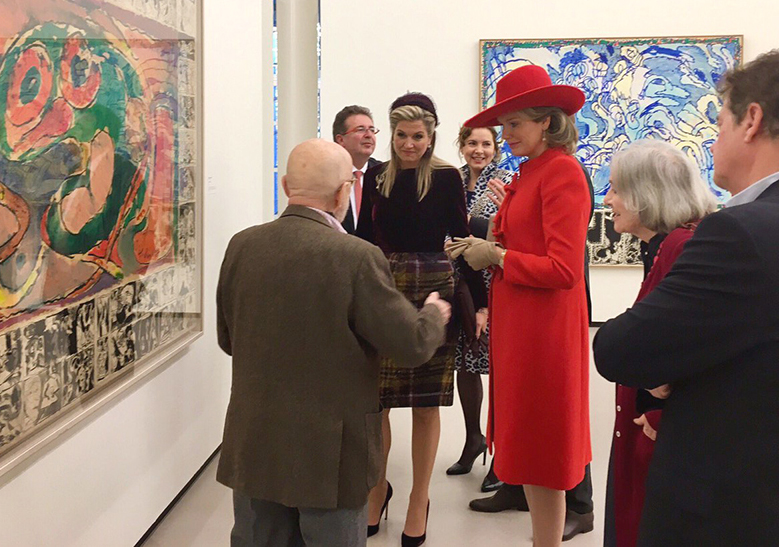 Queen Mathilde and Queen Maxima visit the Alechinsky exhibition, along with the artist and Minister-President Vervoort. 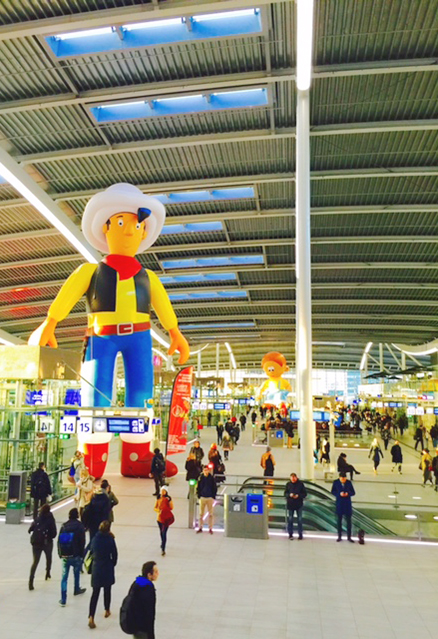 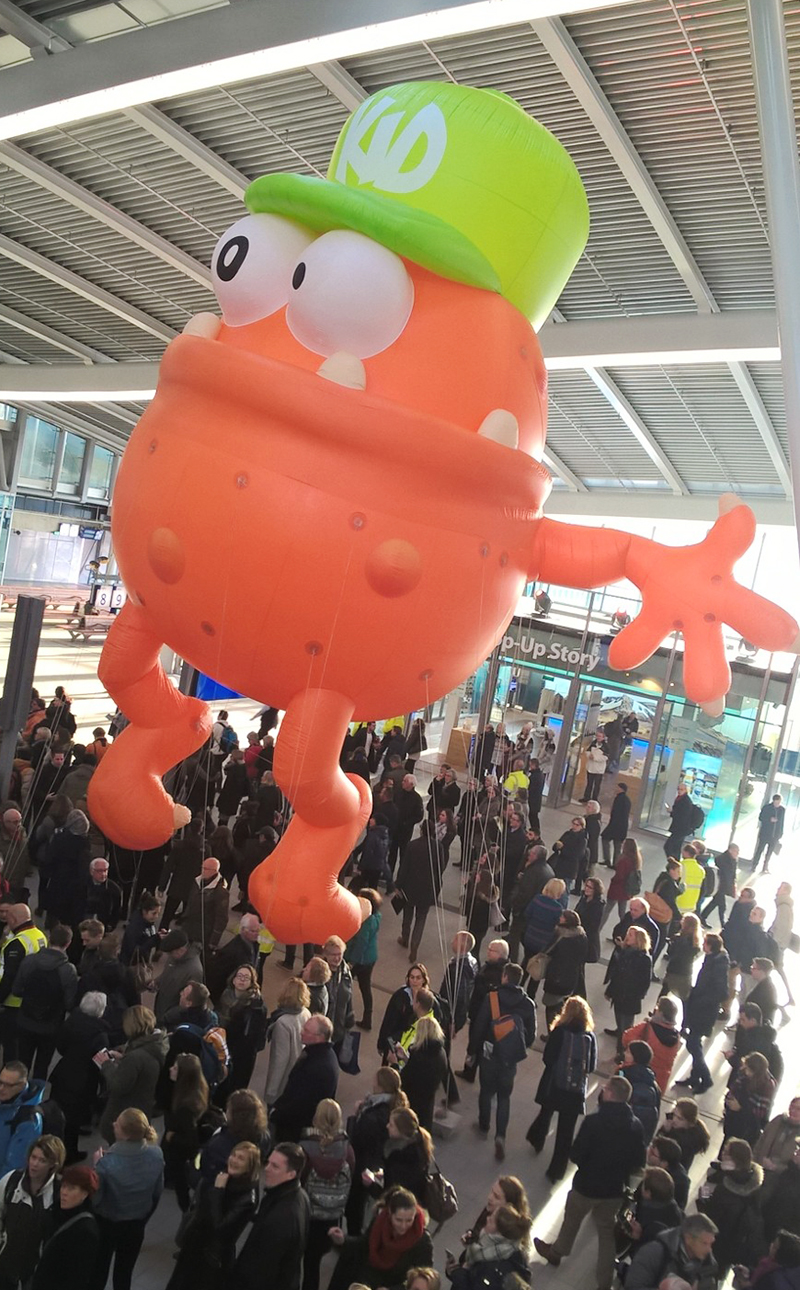 Brussels International, Brussels Invest & Export and VisitBrussels organised or participated in several events on the packed programme of this three-day state visit. Their representatives accompanied the Minister-President of the Brussels-Capital Region.

On Monday 28 November, a reception was organized for the Belgian royals at the Royal Palace of Amsterdam, after a ceremonial inspection of the guard of honour in Dam Square. The two royal couples and the entire official delegation were then welcomed by a giant Tintin balloon in front of De Brakke Grond, the Flemish cultural centre in Amsterdam. The balloon is part of the Balloon Parade, which is organised every year in the margin of the Brussels Comic Strip Festival on the first weekend of September. On that occasion, a parade winds its way through the historic city centre of Brussels.

After this cultural intermezzo, the Minister-President of the Brussels-Capital Region headed to Theater Amsterdam where he gave the closing speech at a conference titled “Belgium and Netherlands Cities: Collaboration, Innovation & Social Inclusion”, which was organised by the Belgian and Dutch offices of the Urban Land Institute. He then attended the signing of several partnership agreements between Brussels-based and Dutch companies and institutions. The day ended with a glittering state banquet, which was held at the royal palace.

On 29 November, the Brussels delegation prepared for a gruelling schedule of events, starting with a symposium at ESTEC (European Space Research and Technology Center) in Noordwijk, followed by a meeting in The Hague with Ankie Broekers-Knol, the President of the Dutch Senate and Khadija Arib, Speaker of the Dutch House of Representatives. They then met with Prime Minister Mark Rutte and members of the Dutch government over lunch. The programme then continued with a visit of the Alechinsky retrospective in the Cobra Museum in Amstelveen. The great Brussels artist himself was their guide. Finally, the delegation attended a concert in Amsterdam by Ozark Henry, accompanied by the National Orchestra of Belgium and young soloists of La Monnaie/De Munt, two international renowned Brussels cultural institutions.

The next day, Queen Mathilde and Queen Maxima boarded the royal train, along with the Brussels delegation, for Utrecht where the Brussels company Besix built the largest railway hub in the Netherlands. The station can receive up to 200,000 passengers daily. On the occasion of this royal visit, six giant balloons of the Brussels Balloon Parade were installed in the great hall and esplanade of the station. The overall effect was quite spectacular! Minister-President Vervoort took advantage of the opportunity to present their majesties with comic books by Marc Sleen, a pioneer of Belgian and Brussels comic strip design, who died shortly before the state visit.

The state visit ended in Eindhoven, in Northern Brabant, with a CEO lunch that focused on the Belgian-Dutch research cooperation and with the inauguration of the Sligro (a wholesaler for the catering industry) “Experience Center” in Veghel.