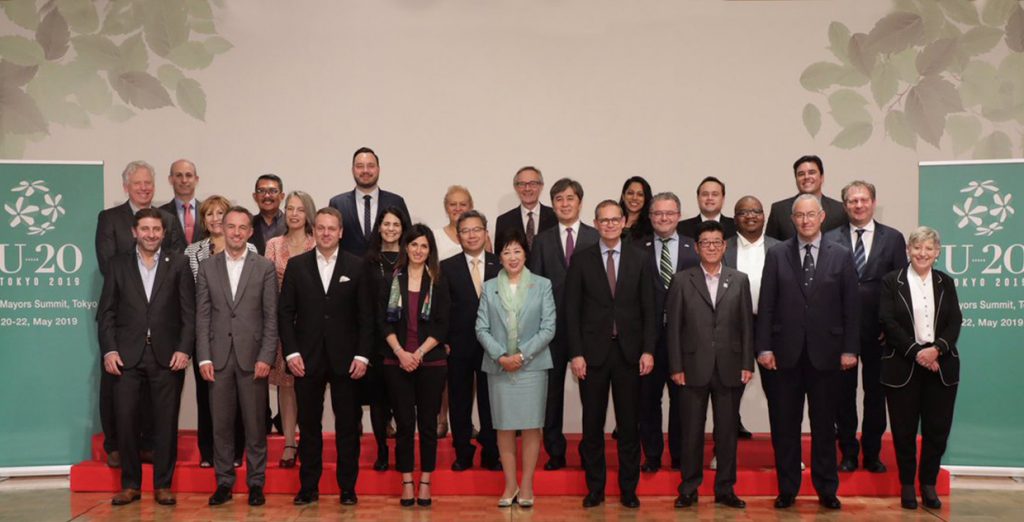 The participants of the U20 Mayors Summit in Tokyo

Brussels participates in the U20 Mayors Summit in Tokyo

From 20 till 22 May, the Brussels-Capital Region participated in the Urban 20 Mayors Summit in Tokyo. The representatives of the world’s metropolises were received by the Tokyo Metropolitan Government on this occasion.

Besides Yuriko Koike, the Governor of Tokyo, who hosted the summit, the Urban 20 Mayors Summit of Tokyo gathered the mayors of Berlin, Helsinki, Osaka, Rome, Rotterdam and the Governor of Jakarta, as well as high-level representatives from other metropolises such as New York, Buenos Aires, Paris, Johannesburg, Montreal, Seoul and São Paulo. The leaders of the C40, UCLG and Metropolis networks also actively contributed to the success of this major international meeting.

A strong message for a sustainable world

The official communiqué, which was presented at the end of the summit, contained a strong message from 30 large metropolises to the Heads of State of the G20, which was held in Osaka on 28 and 29 June. It offers specific recommendations regarding climate action, sustainable economic growth and social inclusion and integration.

The communiqué was personally presented to the Japanese Prime Minister, Shinzo Abe, in the run-up to the G20.

Active participation of the Brussels-Capital Region

Christian Lamouline, the Secretary General of the Brussels Regional Public Service, represented the Brussels-Capital Region at the U20 Mayors Summit. He actively participated as a panellist during the session on Gender Equality and reaffirmed our Region’s support for the ambitious objectives outlined in the official communiqué during the summit’s final Strategic Meeting.

The Brussels presence in the Japanese capital was also a good opportunity to make progress on the Region’s actions in the framework of the Olympic Games (OG), which will be held in Tokyo in July-August 2020.

After a meeting with His Excellency Gunther Sleeuwagen, the Belgian Ambassador, Brent Van Tassel, responsible for the OG within the embassy, and William Delsemme, the economic and commercial Attaché of the Brussels-Capital Region, the participants had a better idea of the opportunities. Among other things, a Belgian House will be set up, in front of the embassy, to host various events, including seminars, networking events and press conferences.

The economic and commercial Attaché of the Brussels-Capital Region also held a meeting with officials of the Organising Committee of the OG who are in charge of hockey. Brussels is particularly well-known in the world of hockey. In fact, it is practically the world capital of this sport. Many of the players of the Red Lions, the Belgian national team which took home silver at the 2016 Olympics in Rio and was the 2018 World Champion, come from Brussels. Last April, a team from the Brussels fringe, the Waterloo Ducks Hockey Club, won the most prestigious club competition, namely the Euro Hockey League. So hockey will definitely play an important part in the programme that Brussels International, hub.brussels and visit.brussels are developing for the Olympic Games. In the meantime, we are already keeping our fingers crossed that our Red Lions will pull off another coup at the 2020 Summer Olympics!