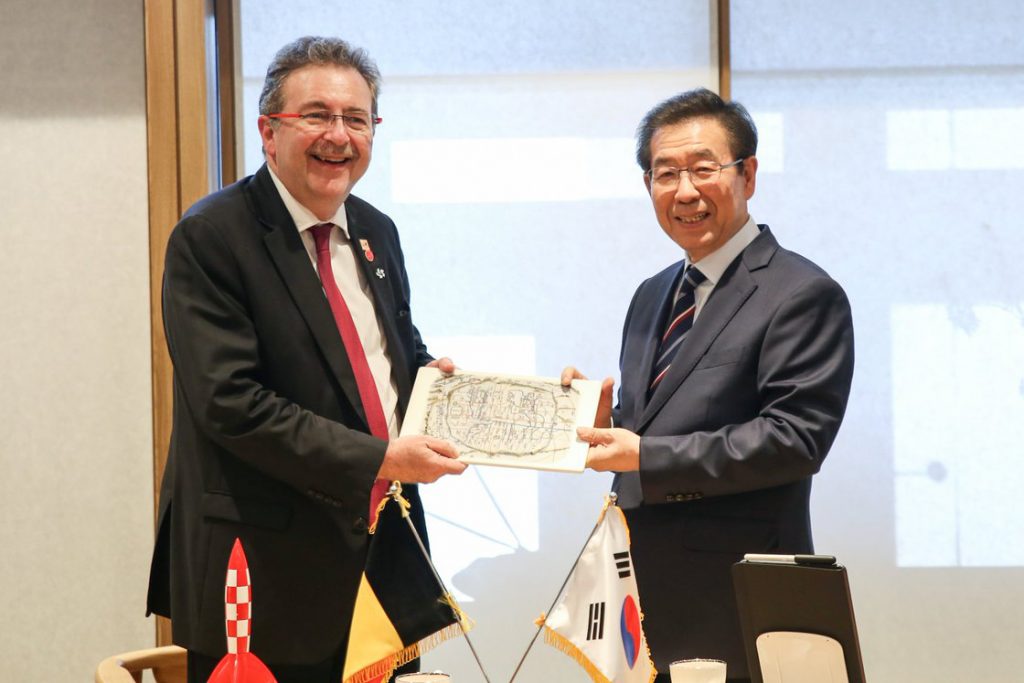 Meeting of Rudi Vervoort, the minister-president of the Brussels-Capital Region and Seoul’s mayor Park Won-soon.

From 25 until 28 March, King Philip and Queen Mathilde made a state visit to Korea. They were accompanied by Rudi Vervoort, the Minister-President of the Brussels-Capital Region, as well as the rectors of universities and colleges, CEOs and journalists. The state visit concentrated almost exclusively on Seoul, the fascinating capital of the Land of the Morning Calm. The city’s population is estimated at just over 10 million, while the population of the sprawling metropolitan area is much larger at 24 million. 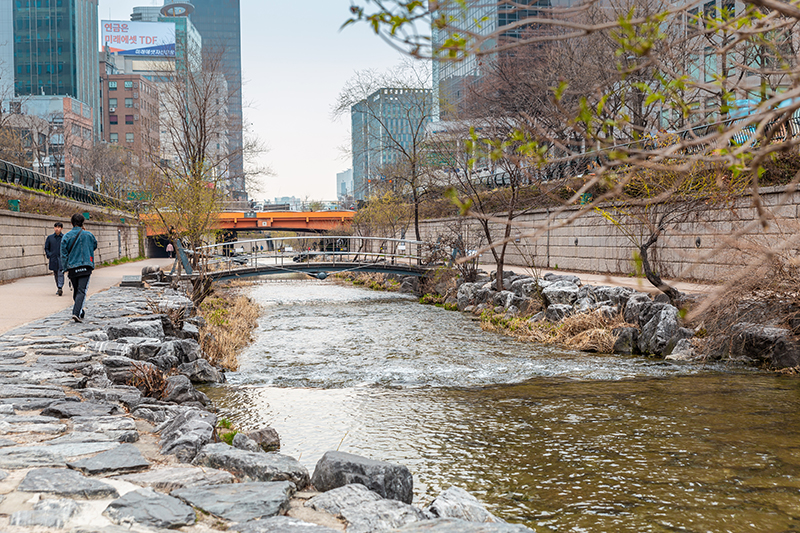 The recovery of the Cheonggyecheon River in the heart of Seoul. 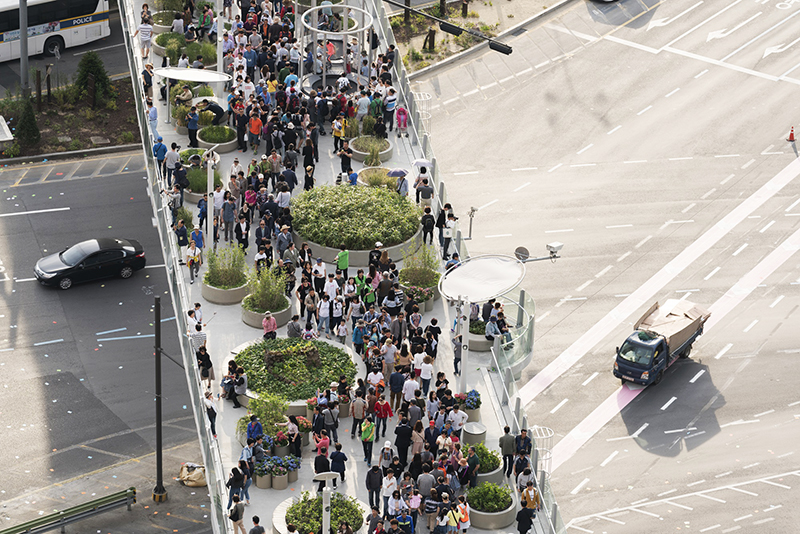 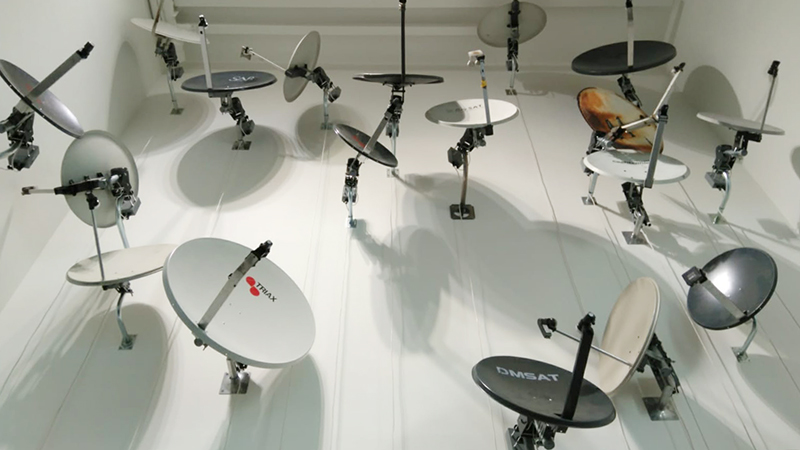 “Paraboles”, by the artist Younes Baba-Ali, one of several works in an exhibition titled “Brussels in SongEun: imaging Cities Beyond Technology 2.0”. 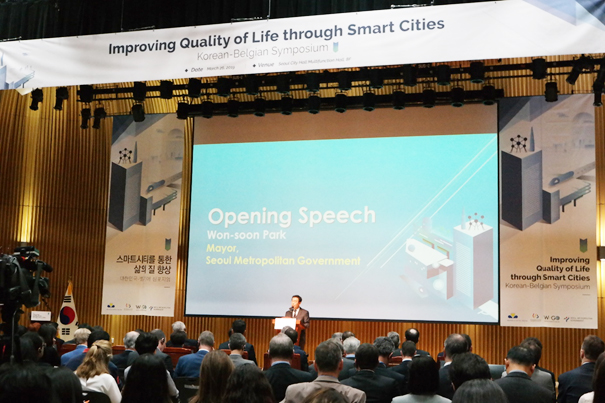 Opening of the Belgian-Korean conference on “Improving Quality of Life through Smart Cities”. 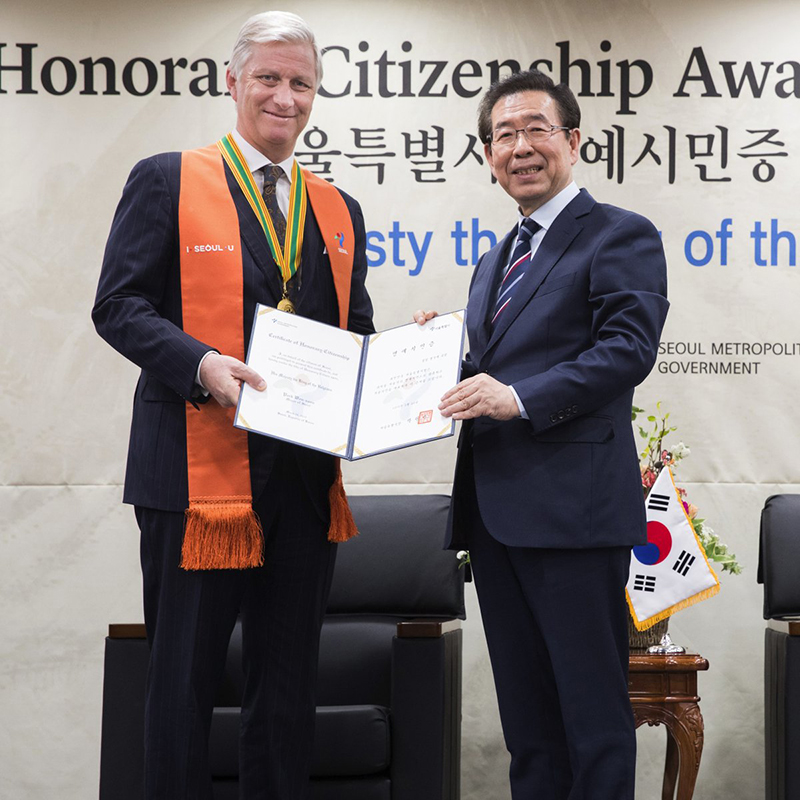 His Majesty King Philip becomes an honorary citizen of Seoul. 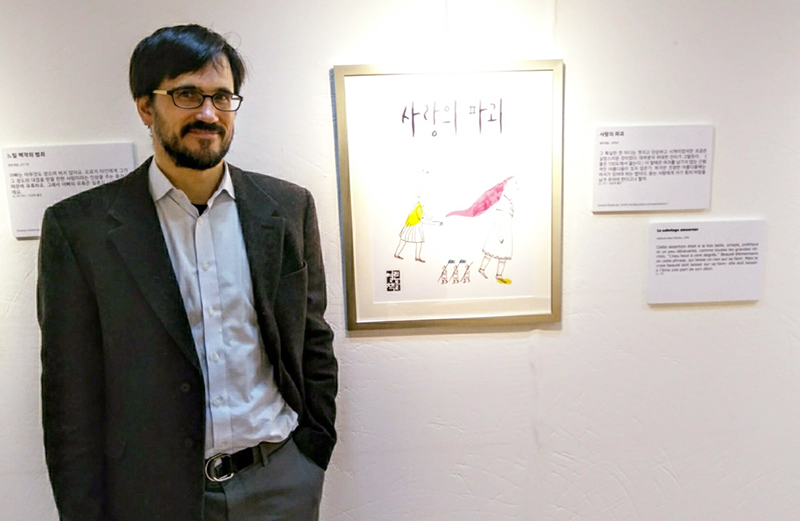 Grégory Limpens portrayed in front of an illustration taken from one of Amelie Nothomb’s novels at the gallery in Gwanghwamun underground station. 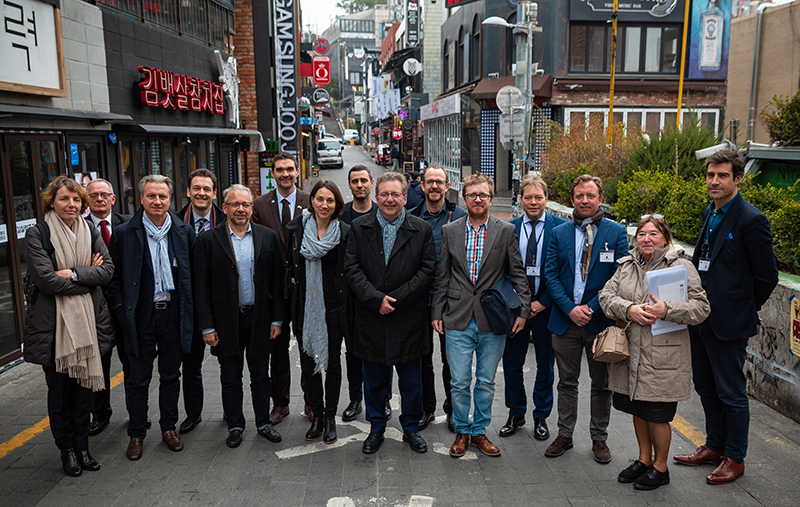 Minister-president Rudi Vervoort, on the streets of Seoul, surrounded by a part of the Brussels delegation.

Seoul, a bilateral partner of the Brussels-Capital Region

The fact that the royal couple chose Seoul for their state visit created an opportunity for the Brussels-Capital Region, as this city has been a bilateral partner of our region since June 2017. Minister-President Rudi Vervoort and his team were therefore able to strengthen the recently-established ties with the Seoul Metropolitan Government and Park Won-soon, its charismatic mayor.

Seoul is at the forefront in many key areas, and urban planning in particular. The Brussels Minister-President was able to visit two extraordinary projects, i.e., the Cheonggyecheon and Seoullo 7017, in the margin of this state visit. These two ambitious projects, in a city which is known for its particularly dense traffic and which is several times larger than Brussels, were a great source of inspiration for our region.

The course of the Cheonggyecheon River, in the heart of the capital, which used to be covered, was uncovered over a stretch of 6 kilometres. The banks were restored and rock elements added, as well as waterfalls and fountains, bridges, works of art, lighting and so on. This exemplary project had to overcome numerous obstacles. The dismantling of the expressway over the river, which was used by 170,000 cars daily, proved to be the biggest one.

Seoullo 7017, the other project that our Minister-President visited, is built atop an overpass, which cuts across the tracks of Seoul’s central station. This disused overpass has since been transformed into a lovely sky garden, with amenities for people of all ages.

Another area in which Seoul and Korea excel is Smart Cities. Our region is keenly aware of this, having joined WeGO (World Smart Sustainable Cities Organization) in 2018. This network was established and is chaired by Seoul, where the network’s headquarters are also located.

The Smart Cities theme was on the agenda twice during the state visit.

On the evening of 25 March, the delegation members were invited to the opening of a magnificent contemporary exhibition at the SongEun ArtSpace, in Gangnam. Twelve artists or collectives – eight from Brussels and four from Korea – were invited to reflect on Smart Cities, a theme that raises numerous ethical, legal and technical questions. The exhibition, which runs until 4 June, is a co-production of Gluon, a Brussels-based foundation and the SongEun Artspace. It received funding from the Brussels-Capital Region, the Wallonia-Brussels Federation and the SongEun Art and Cultural Foundation.

The following afternoon, the delegation attended “Improving Quality of Life through Smart Cities – a Korean-Belgian Symposium” in Seoul’s town hall. Here too, the Wallonia-Brussels Federation and the Brussels-Capital Region jointly organised the event, in partnership with the Seoul Metropolitan Government and the  WeGO network. After a keynote speech, which was attended by His Majesty King Philip, the conference was split into two panels. The former discussed citizens’ place and role in the development of Smart Cities, which continues to be a vital question. The latter examined how Smart Mobility can help large, continually expanding cities tackle the major challenge of mobility. Belgian and Korean experts (public authorities, academia and the private sector) participated in both panels.

Seoul’s mayor Park Won-soon took advantage of our sovereign’s presence in his magnificent town hall to award HM King Philip honorary citizenship of his city, after having shown him the impressive “Interactive Smart City Dashboard” in his office. This dashboard provides a wealth of real-time information about Seoul at a glance.

The Brussels-Capital Region also attended two important conferences in the margin of this fruitful state visit, i.e., “Fintech” and “Digital Media”, which was jointly organised with the Wallonia-Brussels Federation. The delegation also visited a small, but wonderful exhibition in one of Seoul’s main underground stations (Gwanghwamun). The spotlight was on the ties between two citizens of Brussels and Seoul: Laurent Pereira, an architect from Brussels who works in the Korean capital and Grégory Limpens, another Brussels’ citizen who oversees the translation of books by French-language authors into Korean, such as Brussels-based novelist Amélie Nothomb, whose books are illustrated by the talented artist Yunmee Kyong.

Finally, the Korean capital also served as the backdrop for numerous official ceremonies and meetings, including with President Moon Jae-In, the laying of a wreath at the War Memorial of Korea, a visit to the Korean Furniture Museum, the state banquet and the concert which Belgium hosted.