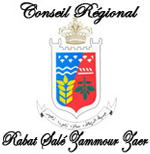 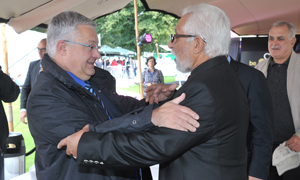 Minister for External Relations Guy Vanhengel and the President of the Rabat-Salé-Zemmour-Zaer region are visibly happy to see each other again. 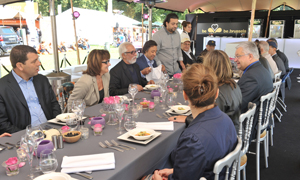 Lunch offered to the delegation from Rabat during eat!Brussels. 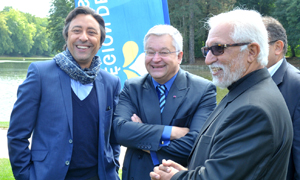 The Minister for External Relations and the President of the Rabat-Salé-Zemmour-Zaer Region with the Moroccan ambassador to Belgium; His Excellency Samir Addahre. 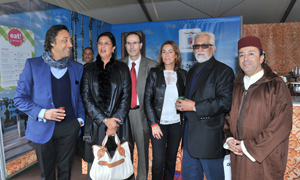 The President at the stand of Rabat with the head of the delegation of cooks, Lahbib Saadi.

A delegation from the Rabat-Salé-Zemmour-Zaer Region, led by its President, Abdelkébir Berkia, was in Brussels on an official visit from 13 to 17 September. The delegation had a full agenda, with several appointments with representatives from various sectors including gastronomy, heritage, sport, disability, youth, environment and trade. A programme which truly illustrates how dynamic our partnership really is.   On Friday 13 September, the Moroccan delegation visited the eat!Brussels festival and more specifically the stand representing its region. It was also an excellent opportunity to admire the beauty of La Cambre Forest and to see how successful the eat!Brussels festival is, as well as seeing how dynamic their countrymen were!   The Heritage Days in Brussels were organised the same weekend as eat!Brussels! The second day of the visit, Saturday 14 September, was thus dedicated to the visit of two Brussels gems: the house of the Governor of the National Bank and Aegidium. The Moroccan delegation was delighted by the Moorish decorations in the former cinema in Saint-Gilles, deeming the stucco and staffs worthy of the best Moroccan craftsmen. The arts and crafts are certainly an area in which the partners can learn from each other and which are conducive to exchanges. The Minister-President of Brussels, Rudi Vervoort, received the delegation for a working lunch. In the evening it was time for some sport: the Minister for External Relations, Guy Vanhengel, accompanied the delegation to a football match between RSC Anderlecht and KV Mechelen at the Constant Vanden Stock stadium. In the coming months a partnership for training young people involving Fatah Union Sport (FUS) in Rabat and our major Brussels club will be finalised. On Sunday 15 September the delegation headed back to eat!Brussels for a lunch with Minister Guy Vanhengel together with the Moroccan Ambassador to Belgium. In the afternoon Minister Evelyne Huytebroeck met with the delegation at the non-profit association Le 8e jour in the framework of the collaboration between Brussels and Rabat for the inclusion of people with disabilities. On Monday 16 September two other important aspects of the cooperation between the two regions were on the agenda, i.e., waste sorting and intercultural exchanges between students. Bruxelles Propreté (tasked with keeping public spaces clean) welcomed the delegation in its new waste sorting centre Recyclis in Forest. The centre, which is fully automated, can now handle more yellow and blue bags. In one year the yellow line can sort 80,000 tons of paper and cardboard while the blue line can handle 20,000 tons of PMD (plastic bottles, metals and drinks cartons). This visit made quite an impression on our Moroccan friends, who wish to draw inspiration from Recyclis’s educational project and develop an awareness campaign about sorting and recycling waste in Rabat. This project would be developed simultaneously with the project with Bruxelles Environnement and the Association of Cities and Regions for Recycling and sustainable Resources Management (ACR+) for optimising waste management in the Mediterranean. After a study which analysed the structure of the informal waste sector in Rabat and the establishment of a cooperative of itinerant waste recuperators, the working meeting on Tuesday 17th focused on the establishment of a permanent network for exchanging information and experience about sustainable waste management and awareness campaigns aimed at the general public. A breakfast at the Elishout institute in Anderlecht, which was attended by the speaker of the Parliament of the Flemish Community Commission Jean-Luc Vanraes and of the principals of the educational establishments which are participating in cultural exchanges between the two Regions was a good opportunity to receive an update about the project and for preparing the visit of 20 young Moroccans to Brussels in early November. The official visit ended with a meeting about the agreement between the two chambers of commerce at BECI (Brussels Entreprises Commerce and Industry) and a meeting with the Minister of Foreign Trade, Céline Fremault.
Share on Facebook Share on Linkedin Share on Twitter